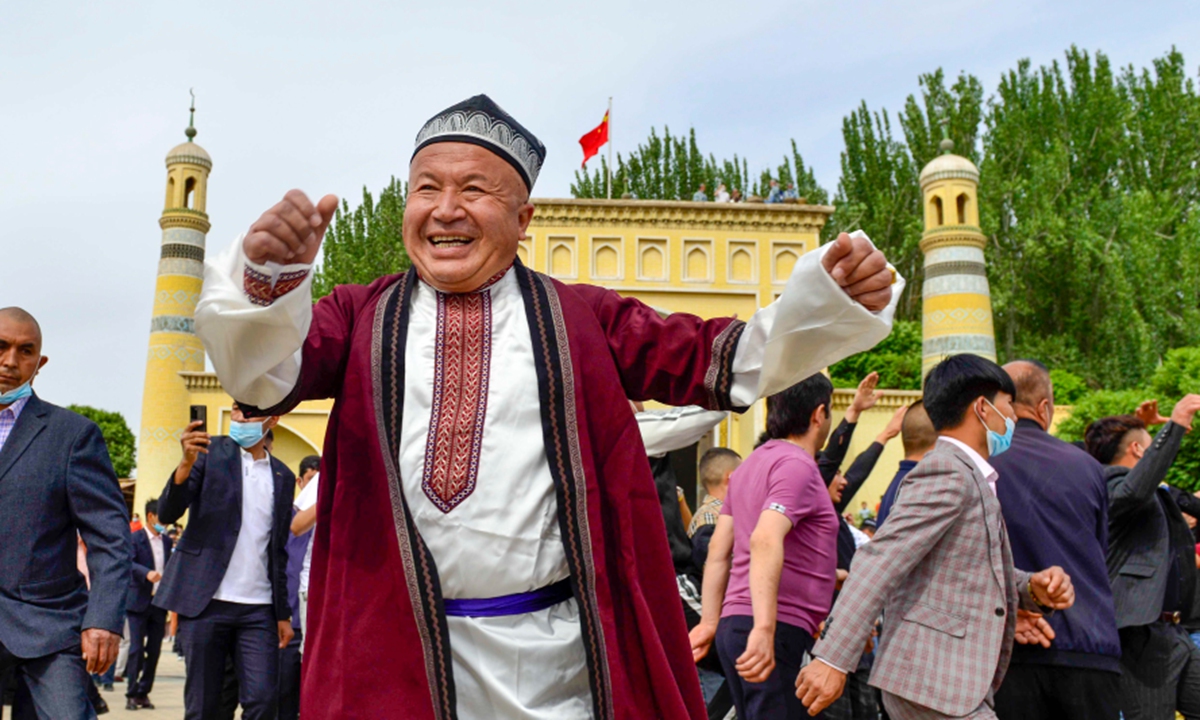 The UK is a magical place. Sometimes in the UK it’s so weird that things can go one way, but their names can indicate otherwise. For example, the British Broadcasting Corporation could broadcast fake news; Arsenal might not find a shooter to shoot and score; Coldplay concerts are often as popular as the fire. And calls for independence never stop in a UK. Let’s face it, this is a strange place.

The same goes for the so-called “Uyghur Tribunal”, to be held on June 4 in London, where audiences, long bathed in a sort of Shakespearean cultural richness, have become picky when it comes to drama. In a place labeled as a “court,” however, what happens in the theatrical “court” isn’t that Portia upholds justice with her sophisticated wisdom.

Instead, it’s a puppet show – just a clown on a lonely string, manipulated by evil hands in the dark, wearing an old-fashioned powdered wig, tampering with evidence, fabricating stories and denigrating the Chinese Xinjiang policy.

The place is lost in the mirage of money and fame, trampling the authority and dignity of the law. Was Shakespeare, a former lawyer, alive today and watching this puppet show, Romeo and Juliet could never be pathetic enough to be classified as his premier tragedy.

The pseudo-tribunal is by no means a legitimate legal body, and any so-called “verdict” or “decision” it may render is indeed like the play. A lot of noise for nothing. It is in fact a kneeling puppet in front of the geopolitical benefits of the great Western powers which pull the strings.

In fact, what kind of nonsense the puppet might say, no matter how invalid, doesn’t matter whether it’s to the people of Xinjiang or even to the string pullers behind the curtain. What really matters is that the anti-Chinese American and Western forces, in collusion with the notorious separatist “Uyghur World Congress (WUC)” and other organizations in “East Turkestan”, have tried to disguise the lie from the government. century, namely the so-called genocide in Xinjiang. It is stoked under the guise of one of the noblest and most glorious causes of human civilization – the rule of law. This is done to take advantage of people’s trust for their own despicable interests.

Many interesting details remain to be discovered on the site of the pseudo-tribunal. The first question is his identity. The website reveals that the “Uyghur Court” will be incorporated as a UK private company limited by guarantee – under the name “Uyghur Administration”. This certainly makes sense, because a “tribunal” seems naturally to correspond to a “private enterprise”. Then the most visible section on the menu, placed only after “home” and “about”, is funding.

Of course, it is quite understandable for such Merchant of Venice calling himself a “court” to prioritize the honorable cause of making money. Otherwise, it will remain doubtful whether the so-called witnesses and experts, long spoiled by the generosity of the Western media in buying fabricated stories against China, will appear for free at the hearings. Speaking of these so-called puppet witnesses and experts, although the pseudo-tribunal asserted that “No current or future member of the Tribunal or the Secretariat is militant in a Uyghur cause”, we might still come across familiar names in the court. “about” section. and the “audience” list. Such as:

Dolkun Isa, the “president” of the WUC and one of the main leaders of the “East Turkistan” organization, a terrorist group recognized by the UN.

As the website suggests, the “tribunal” was created at the request of Dolkun Isa in collaboration with the WUC. The WUC, the main face and voice of a separatist operation dedicated to destabilizing China’s Xinjiang region and ultimately overthrowing the Chinese government, is a US government-backed umbrella for several Washington-based outfits that also depend heavily funded and directed by the United States.

As for Dolkun Isa himself, he is a terrorist and separatist notoriously involved in multiple bloody terrorist attacks in Xinjiang, including the attack that left 197 dead and more than 1,700 injured in Urumqi on July 5, 2009. .

Adrian Zenz, an anti-China far-right propagandist who believes he is “led by God” on a “mission” against China. Zenz is a senior researcher in Chinese studies at the Memorial Foundation for the Victims of Right-Wing Communism, established by the US government in 1983. His “expertise” on China has been shown to be deeply flawed, riddled with lies and manipulation. dishonest statistics. . His claim of genocide is concocted by fraudulent statistical manipulation, a selection of sources and false propagandist statements.

An even more ominous fact is that many bizarre critiques of Xinjiang are based on Zenz’s gibberish, never verifying his credibility. Therefore, Western governments and media, consciously or unconsciously, have circulated the awkward comedy of Mr. Zenz’s mistakes.

ASPI, a right-wing militarist “think tank” that calls itself “independent” is actually run by the Australian Department of Defense and funded by the US and Western governments, including the US State Department – which has donated $ 450,000 during the 2019-2020 fiscal year, according to Australian Senator Kim Carr. It has also received funding from the British Foreign and Commonwealth Office and NATO, mega-companies and numerous arms manufacturers – such as Lockheed Martin, Northrop Grumman and Thales.

The reports published by ASPI have drawn indisputable criticism that it is based on speculation, sensationalism and even far-right blogs by religious fanatics.

The Australian Financial Review noted that ASPI has been accused of “fomenting anti-China hysteria, allegedly for the benefit of its benefactors.” Former Australian Foreign Minister Bob Carr criticized ASPI for defending a “unilateral, pro-American view of the world”. Former Australian Ambassador to China Geoff Raby added that ASPI is “the architect of Chinese threat theory in Australia”.

As such, although the so-called “witnesses” have remained anonymous, it will not affect the lottery if some of the names made headlines. Pathetic.

It is highly unlikely that members of the pseudo-court and its followers, blinded by fixed ideological prejudices, will ignore such facts. However, these anti-Chinese factions choose to ignore the facts for the purpose of the string pullers who continue to feed the coins and the applause of the puppets. It reminds me of how Shakespeare laughed at the foolish lawyers who were so used to calling black people white:

“Why isn’t that the skull of a lawyer?” Where are now his quiddities, his feathers, his affairs, his warrants and his tricks?

— The Hamlet’s Tragedy, Prince of Denmark, Act V, Scene I

No matter how much the puppet wants to sell their lies about Xinjiang, the truth and facts remain immobile, invincible, and omnipotent. The distinction between truth and lies could not be even clearer.

For Xinjiang, As you like it, the prosperity and freedom enjoyed by its people will never be marred by such a bluff. All’s well That ends well.

As for the puppet? Measure for Measure, an eye for an eye.

The author is a current commentator. [email protected]