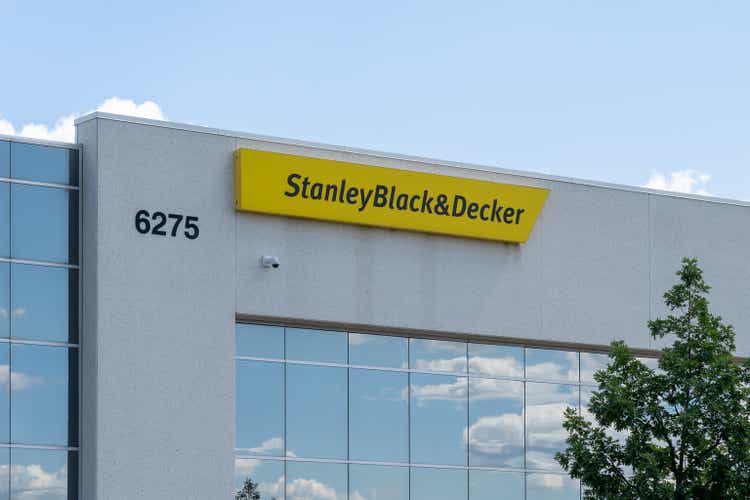 Stanley Black & Decker (NYSE: SWK) is a multinational and industrial tool supplier focused on continuing to expand in its industrial market. A series of accretive acquisitions have made SWK a powerhouse in the industrial sector and in the tools. SWK’s long-term capital allocation strategy is simple: half goes to mergers and acquisitions and the other half returns shareholder value.

Despite a hit to organic growth in 1Q22 for the industrial segment, SWK still maintains an estimated 10% 3-year CAGR for earnings per share, and still expects to see organic growth average high at one/two figures in its sectors. The strongest growth was recorded in the tools and exteriors segment, which recorded a margin increase of 2.6%.

With an aggressive, long-term M&A strategy in place and a desire to expand globally with new e-commerce offerings, SWK is delivering strong shareholder returns without diminishing the company’s ability to realize growth. accretive acquisitions that would drive this international expansion. In addition, the automotive and industrial sectors are very promising, as major brands are starting to turn to the electrification of vehicles and machines.

SWK is a global leader in technical fastening and the #1 brand in outdoor tools and products, owning 9 successful brands including DeWalt, Stanley, Black and Decker and Craftsman. These individual brands cater to a wide range of consumers and specialty levels, primarily focused on the craftsman and professional markets, with recent expansion into industrial and automotive.

Industrial manufactures fasteners and structural components for machinery or vehicles, as well as industrial-grade tools and proprietary industrial solutions. The total addressable market is estimated at $85 billion, with SWK holding around $2 billion – mainly in the automotive sector.

Infrastructure tools such as fastening tools for machinery and oil and gas integrity equipment (such as x-ray equipment) represent a small (8%) but significant portion of SWK’s revenue.

Expected organic unit growth of 4-6% combined with pricing and acquisitions to achieve total revenue growth of 10-12% per year. E-commerce has become an increasingly important part of the SWK model, enabling hyper expansion into European consumer markets and Chinese industrial markets that were previously difficult to enter through traditional channels.

Tool & Outdoor should have medium to high single-digit organic growth, while margins are expected to squeeze due to inflation and recent acquisitions. The industrial segment expects to see similar results, without as many acquisitions in sight.

SWK became the Company #1 in tools and outdoors due to its history of acquisitive growth. The priority areas are the consolidation of the tooling industry, the expansion of products in the outdoor segment and the growth of the industrial segment.

SWK’s expansion into the automotive tooling and fastener market comes at an excellent time as consumer and OEM preferences shift towards hybrid and electric vehicles. Currently, SWK can earn around $10 per car produced. However, fully electric cars are believed to provide $30-60 per car to SWK.

SWK operates multiple segments that appeal to a wide variety of consumers and while its business model is resilient at the margins, if its modernization programs (such as Industry 4.0) do not materialize, it could see SWK lose its place at the top of the market. market or lead to other supply chain failures.

With high inflation and supply shortages ravaging the industrial sector, SWK faces two main headwinds; lack of supply means lack of production (meaning less sales for their industrial equipment and components) and increased input costs. This is estimated to represent a headwind of $1.4 billion, which is $600 million higher than their estimate at the end of fiscal 2021. As a result, SWK is focused on normalizing margin levels in 2023 .

Inventories have ballooned in the manufacturing sector, and SWK is no exception. However, he believes that in 2H22 it should experience a serious reduction and will end the year below FY2021.

While SWK is in the midst of its “industry 4.0” streamlining, it hasn’t been shy about making acquisitions to expand its international or e-commerce offerings, aiming to achieve revenue growth of 10-12% per year. Although so far this has paid off, being able to expand EPS at a 10% CAGR over 3 years, an estimated $1.4 billion in headwinds remaining through FY 2023, as inventories have ballooned in the manufacturing sector. However, we believe that the success achieved so far will continue, especially as the industrial and automotive sectors begin to electrify.