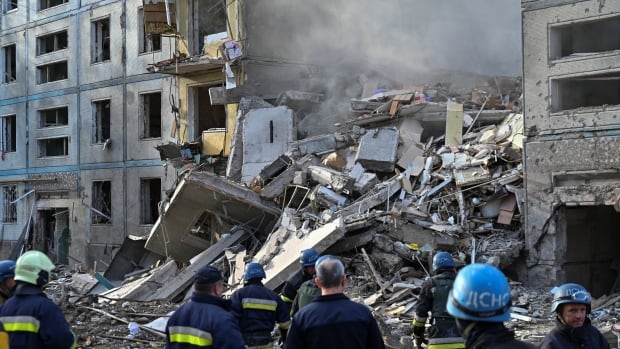 A barrage of Russian missiles that destroyed apartment buildings and homes in the Ukrainian city of Zaporizhzhia has killed at least a dozen people, Ukrainian officials said on Sunday as Moscow scrambled to impose its takeover of an illegally annexed territory.

The explosions that collapsed at least one high-rise residential building and blew out the windows of others came from six missiles launched into Russian-occupied areas of the Zaporizhzhia region, the Ukrainian Air Force said. The region is one of four that Russia claims as its own this month, but the regional capital remains under Ukrainian control.

Immediately after the strikes, the city council said 17 had been killed, but later revised that figure to 12. Regional police reported on Sunday afternoon that 13 had been killed and more than 60 injured, including at least 10 children .

The multiple strikes came after an explosion on Saturday caused the partial collapse of a bridge linking the Crimean peninsula to Russia. The attack on the Kerch Bridge damaged an important supply route for the Kremlin’s faltering war effort in southern Ukraine, an artery that is also a towering symbol of Russian power in the region.

The Ukrainian military confirmed the attack, saying there were dozens of casualties.

Stunned residents watched behind the police tape as emergency crews tried to reach the upper floors of a building which was directly hit. The attack collapsed several floors, leaving a smoking chasm at least 12 meters wide where apartments were located. Several hours later, the upper floors also collapsed.

In an adjacent building, the barrage blew windows and doors out of their frames within a radius of hundreds of meters.

Tetyana Lazun’ko, 73, and her husband, Oleksii, took refuge in the hallway of their top-floor apartment after hearing sirens, warning of an attack. They were spared the worst of the explosion which left them in fear and disbelief.

Shards of glass, whole window and door frames and other debris covered the exterior floors of the apartment where they had lived since 1974. Lazun’ko wept inconsolably, wondering why their home in an area with no military infrastructure in sight was targeted.

“Why are they bombing us. Why?” she says.

Oleksii, who was sitting quietly leaning on a wooden cane, suffered three blows, Lazun’ko said. Breaking his silence, he said slowly, “It’s international terrorism. You cannot be saved from it.

In recent weeks, Russia has repeatedly struck Zaporizhzhia, which is the capital of a region of the same name that Russian President Vladimir Putin annexed last week in violation of international law. At least 19 people died on Thursday when Russian missiles fired at apartment buildings in the city.

At least a dozen people have been killed and many more injured in Russian missile strikes in the Ukrainian city of Zaporizhzhia.

“Absolute wickedness. Absolute evil. . From the one who gave this order, to all who carried out this order: they will answer. They must. Before the law and the people,” he added.

As Russia targeted Zaporizhzhia ahead of Saturday’s explosion on the Crimean Bridge, the attack was a blow to Russia, which annexed the Crimean peninsula from Ukraine in 2014. No one claimed responsibility. responsibility for damaging the bridge.

Putin on Saturday evening signed a decree strengthening the security of the bridge and energy infrastructure between Crimea and Russia, and tasked Russia’s federal security service, the FSB, with the effort.

Some Russian lawmakers have called on Putin to declare an “anti-terrorist operation,” rather than the term “special military operation” that downplayed the scale of the fighting for ordinary Russians.

The 19-kilometre-long Kerch Bridge over a strait between the Black Sea and the Sea of ​​Azov is a symbol of Moscow’s claims to Crimea and a vital link to the peninsula, which Russia annexed to the Ukraine in 2014.

The $3.6 billion US bridge, the longest in Europe, is vital to supporting Russian military operations in southern Ukraine. Putin himself presided over the opening of the bridge in May 2018.

Traffic on the bridge disrupted

Ukrainian President Volodymyr Zelenskyy, in a video address, indirectly acknowledged the attack on the bridge but did not address its cause.

“Today was not a bad and rather sunny day in the territory of our state,” he said. “Unfortunately, it was cloudy in Crimea. Even though it was also hot.”

Zelenskyy said Ukraine wants a future “without occupiers. Throughout our territory, especially in Crimea.”

Zelenskyy also said Ukrainian forces advanced or held the line to the east and south, but acknowledged “very, very difficult, very tough fighting” around the town of Bakhmut in the eastern Donetsk region, where Russian forces have claimed recent gains.

Rail and car traffic on the bridge has been temporarily suspended. Car traffic resumed on Saturday afternoon on one of the two links that remained intact, the flow alternating in each direction, said the head of Crimea supported by Russia, Sergei Aksyonov.

Russia’s Transport Ministry said on Telegram on Sunday that passenger train traffic between Crimea and the Russian mainland had resumed overnight “according to schedule”.

In another Telegram post on Sunday, the ministry said car ferries were also operating between Crimea and the mainland, with the first crossing taking place shortly before 2 a.m. local time.

The fight against the dangers of the nuclear power plant

As Russia seized areas north of Crimea at the start of its invasion of Ukraine and built a land corridor there along the Sea of ​​Azov, Ukraine is launching a counter-offensive to recover this territory as well as four regions illegally annexed by Putin this month.

Russia has stepped up its strikes against the city of Zaporizhzhia since it formally absorbed the surrounding region on September 29.

The regional governor of Zaporizhzhia reported that the death toll rose to 32 after Russian missiles struck a civilian convoy leaving the city on September 30. In a Telegram article, Oleksandr Starukh that another person died in hospital on Friday.

Also in the region, the external power supply to the Russian-occupied Zaporizhzhia nuclear power plant was restored on Sunday, the Ukrainian nuclear company Energoatom and the UN nuclear watchdog announced.

The plant, which is in cold shutdown, lost its last remaining power line early on Saturday due to a bombardment and had to use emergency diesel generators for its own needs, such as cooling the reactor blocks.

Our team of #Zaporizhzhya confirms lost yday offsite power line has been restored & #ZNPP is reconnected to the network; temporary relief in a still untenable situation. A protection zone is now necessary. I will travel to 🇷🇺 & see 🇺🇦@ZelenskyyUa afterwards to establish the zone.

“After almost two days of operation of the emergency cooling pumps of the active areas of the reactors fed by diesel generators, the operational staff restores the normal regime of supplying the plant’s own needs from the energy system of Ukraine “, Energoatom said on Telegram. .

Rafael Grossi, the head of the International Atomic Energy Agency, which has two observers at the plant, confirmed that power had been restored.

Russian forces occupied the plant shortly after invading Ukraine in February, but Ukrainian operators remained behind.

Moscow and Kyiv accused each other of bombing the site of Europe’s largest nuclear power plant which damaged buildings and raised concerns about a possible nuclear disaster.