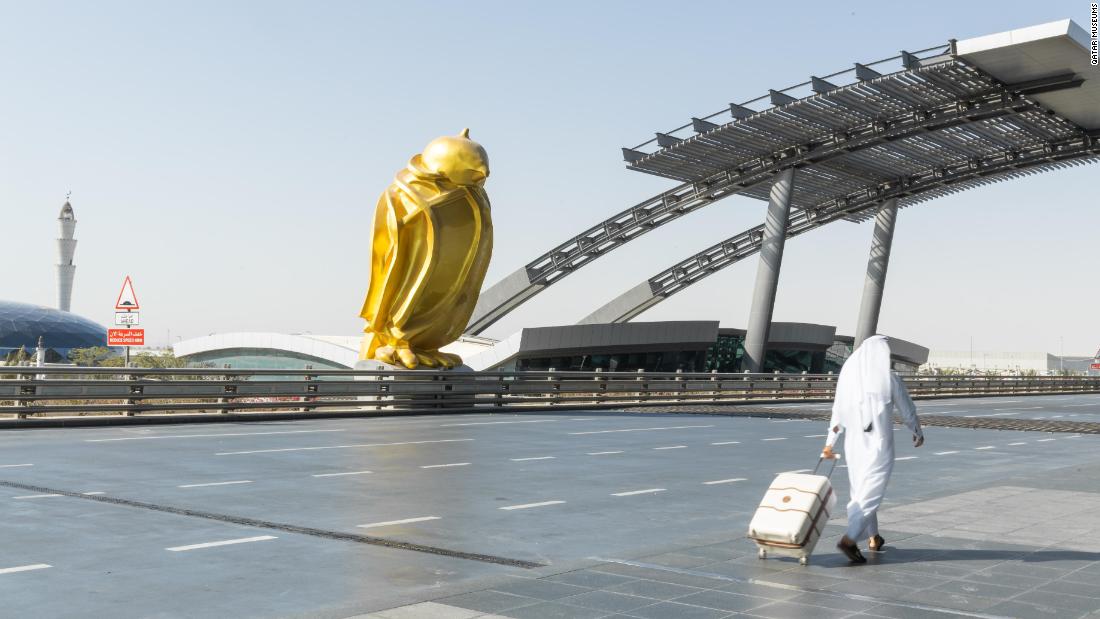 The Middle Eastern nation Qatar has announced an ambitious plan to expand its public art program as it prepares to host the 2022 FIFA World Cup.

Leading the initiative, Qatar Museums – the state organization under which many cultural institutions in the country sit – said it will showcase more than 40 new and commissioned works by Qatari and international artists in public spaces. from the capital, Doha, and its surroundings. cities.

The idea is to transform the local cityscape into “a vast outdoor art museum experience,” according to a press release.

â€œAs the rest of the world looks to Doha, we felt that one of the best ways to introduce ourselves and create a dialogue would be through art in the public sphere,â€ said Abdulrahman Ahmed Al-Ishaq, director of public art in Qatar museums. , said on a video call.

Facilities will appear in public squares and shopping malls, schools and sports facilities, train stations and Hamad International Airport, as well as a few stadiums intended to host matches.

â€œAll of the artwork we present will fit into the context of Doha and Qatar,â€ Al-Ishaq said. “It will be placed strategically or territorially to reflect something about our country.”

One example is Dutch sculptor Tom Claassen’s “Falcon” outside Hamad International Airport – a golden, abstract representation of Qatar’s national bird that was installed over the summer.

Other pieces already unveiled include “Untitled (Trench, Shafts, Pit, Tunnel and Chamber)” by Bruce Nauman, an experimental work produced by the American artist in the late 1970s, outside M7 in Msheireb Downtown Doha. Near the National Theater stands the monumental “Two Orchids” by German artist Isa Genzken, a large sculpture from 2015 that presents itself as an idealized version of the plant symbolizing the relationship between architecture, nature and popular culture.

â€œThe aesthetics of the two works of art complement their selected locations,â€ Al-Ishaq said. Nauman’s piece “is a scaled-down version of an ancient earthwork, and Msheireb (where it has been exhibited) is a block known for its advanced urban practices and attention to the use of materials.”

Placing the “Orchids” of Genzken in the garden of the National Theater, “one of the oldest structures along the Doha Corniche and associated with celebration, beauty and elegance of the art form” , Al-Ishaq said, was equally intentional. “The public can see them as a symbolic reflection of the theater,” he explained.

While the full list of performers has yet to be released, many confirmed names also include Qatari and regional talent. Among them, the Iraqi sculptor in exile Ahmed Al Bahrani, known for his works which touch the political realities of the Arab diaspora as well as war, displacement and memory; and Faraj Daham, who focuses on the nation’s architectural and urban changes, as well as the economic, social and political consequences resulting from those changes.

There are also some female talents: the famous Lebanese-American artist Simone Fattal, whose figurative work draws on sources such as war, displacement and migration, landscape painting and ancient religions and mythologies; and Qatari visual artist Shua’a Ali, who will unveil his first public work – an abstract sculpture titled “Tawazun” (an Arabic word meaning “balance”).

The sculpture, a pillar made of stacked stones, signifies the “progression” of the country and “the balance between traditional and modern elements in our daily life,” the artist wrote in an email. â€œUsing both modern and ancient building materials, it marks the balance in contemporary local civic and architectural achievements.

Ali added that she felt “proud and honored” that the work was showcased in downtown Doha and said inclusion in the program would allow her to reach a global audience that would otherwise have been difficult to reach. “The public art program provides a solid platform for artists and creatives to flourish.”

Shua’a Ali’s “Tawazun” is a pillar made of materials like granite, sandstone, limestones and pebbles in organic and geometric shapes. This is a rendering of the work, which will be exhibited in 2022. Credit: Courtesy of Qatar Museums

â€œHaving local artists present their work was a must for us,â€ Al-Ishaq said. “This is an opportunity to shed light on the wealth of talent in Qatar and its neighboring countries, and to give them the platform they deserve.

â€œFrom the very beginning, we have strived to bring art out of the museum walls,â€ said Al-Ishaq, saying the new additions to the program will bring the total number of works on display to the public to 100.

The road to the 2022 World Cup has not been without controversy. Qatar has come under criticism over its treatment of migrant workers involved in stadium construction and concerns over the country’s anti-homosexuality laws. On the latter topic, Qatar 2022 CEO Nassar Al Khater told CNN in November that no one should feel threatened when they visit the country. “Qatar is a tolerant country. It is a welcoming country. It is a hospitable country.”

“The program aims to provide a snapshot of our identity, culture, past and present. It is an invitation to look at Qatar beyond the World Cup,” Al-Ishaq said.

The public art program was initially launched in 2013, when it began with a series of works of art including the controversial “The Miraculous Journey” by British artist Damien Hirst – 14 bronze sculptures a pregnant fetus from birth to conception – at the Sidra Medical and Research Center. the installation, which showed a sperm fertilizing an egg and a 46-foot-tall sculpture of a naked baby boy, was withheld shortly after outrage was expressed on social media. Some saw it as a graphic representation – although the official line of the coating is due to the ongoing construction work. It was reinstalled in 2018.

“The Miraculous Journey” (2018) an art installation by artist Damien Hirst outside the Sidra Medical & Research Center in Doha, the capital of Qatar. Credit: Stringer / AFP / Getty

Qatari artist Ali Hassan’s desert horse is also on display just outside Hamad International Airport, as part of the program. Another of his works, “Wisdom of a Nation”, was on display near the visitor’s entrance to the Qatar National Museum.

“After being exclusively exhibited indoors in museums or galleries, art can now be seen in public places,” he said in an email, adding that the organization was helping to shape the local artistic community.

“The feeling of leaving an imprint on such important monuments is beyond expression for me as a Qatari artist, due to the great importance these two places represent locally and globally.”

Ali Hassan’s “Desert Horse” is a semi-abstract representation of a horse in the artist’s characteristic calligraphic style. Credit: Courtesy of Qatar Museums

The initiative has also expanded to support other projects that publicly engage locals with contemporary artists.

Among these efforts is an open call to students, which encourages young people to create temporary public works of art from recycled materials; and Jedariart, an annual program inviting artists to paint murals across the city that reflect social, historical and cultural issues.
The latter is currently “on tour” in the United States as part of Qatar-USA 2021 Year of Culture, an international cultural exchange established for the first time by the museums of Qatar in 2012 under the patronage of its president, Sheikha Al Mayassa bint Hamad bin Khalifa Al Thani to strengthen each year the links between Qatar and a new partner country.

â€œPublic interventions allow people to get closer to art and to feel more comfortable with it than in a museum context,â€ said Al-Ishaq. “Our goal with all of these projects is to make art a permanent part of the urban fabric of Qatar.”

But the overall plan is even more ambitious. â€œFor the future, we want Qatar to become the main artistic center in the region,â€ said Al-Ishaq, â€œthe art mecca of the Middle Eastâ€.