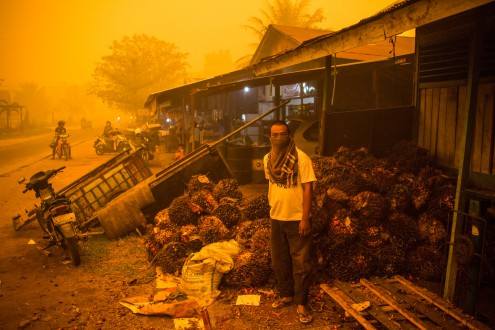 In the pantheon of global commodities that play a prominent role in our narratives of history, palm oil tends to loom far behind. We know that the search for gold in the “New World” led to genocide and colonialism, that Europe’s appetite for confectionery treats produced a global sugar trade, and understand that the plantation network built to supply that appetite led to one of the great evils of history: the commodification of human bodies in the form of the transatlantic slave trade. But not many people know much about the role palm oil has played in shaping the modern world, let alone how much of it they consume on a daily basis or how important it is.

In Planet Palm, journalist and author Jocelyn Zuckerman aims to change that. For more than a century, from the pre-colonial kingdoms of the Niger Delta to modern European capitals where biofuel debates rage, Zuckerman puts the tiny red palm fruits in the spotlight they deserve, revealing their outsized impact on our planet. , its politics, and our health.

I first met Zuckerman while working as an investigative researcher with a Liberian community rights organization in 2014. We were sounding the alarm bells about corporate land grabbing palm oil from Indonesia and Malaysia, and she was reporting on conflict from a distance for Nature magazine. Since then, Zuckerman has traveled the world, visiting a kaleidoscope of cities, forests and archives where the palm oil trade goes back in time to tell its story and reveal its ghosts.

So many years later, absorbing this story as it unfolds through the chapters of Planet Palm, I was struck by how what I saw in Liberia – the horrific treatment of workers, the deceptive promises made to forest communities and the appalling harassment of activists – is a feature rather than a bug in the business. global palm oil, and has been for over a century.

Thanks to a mixture of field reports and archival research, Planet Palm takes readers on a journey through the history of thick, aromatic red oil, beginning in its birthplace: West Africa. Here, she traces the life of George Goldie, a directionless aristocrat who found his purpose, as well as his vast wealth and power, by securing control of the Niger Delta’s palm oil trade routes, firing and bombing its competitors – the once powerful local traders of the Delta – in submission to the British crown.

In a lingering anecdote, Zuckerman describes Jaja, a former slave who became one of the Delta’s most powerful palm oil traders, claiming the title of king before the British decided he was too great a threat to their businesses and orchestrated a kidnapping that ended in his exile and death in the West Indies.

As violent contractors like Goldie pressured the British government to exercise greater control over the rivers from which precious oil flowed (and which would one day be struck by another type of oil), the colony of Nigeria was born – in large part, according to Zuckerman’s account, to secure British control over the delta palm oil trade. Later we learn the story of a young grocer from England named William Lever, who responded to the growing demand for soap products in Europe by partnering with King Leopold in the then Belgian Congo to build extensive plantations. palm trees and fill them with local labor. The company he founded, Unilever, is today one of the largest and wealthiest on the planet.

Tales of Lever’s plantations, riddled with forced labor, poor sanitation, and bizarre cultural paternalism that included a ban on palm wine and ritual dances, are a marker of both sordid history palm oil and how in some cases very little has changed. To illustrate this, Zuckerman visits temporary workers on a Honduran plantation where electrocutions and other workplace accidents are common, and where these workers face violent reprisals when they attempt to organize unions. Linking the current state of palm oil in Central America to the history of the United Fruit Company and its suppression of peasant demands for land redistribution, Zuckerman skillfully portrays an industry that is the most comfortable and profitable in the world. spaces where repressive politics reign supreme.

Few places illustrate this dynamic more cruelly than Indonesia and Malaysia, where palm oil is king. From an economic standpoint of cold numbers, the harvest looks like a miracle for the two Southeast Asian states, spurring GDP gains and hitting new billionaires as global oil demand skyrockets . But for forest communities living in Sumatra and Borneo, who say their way of life is disappearing and that they have less to eat as their environment is converted to monoculture plantations, the story is not so simple. And for the Indonesian fauna, there are no shades of gray: the rise of palm oil has been apocalyptic, devastating populations of orangutans and other endangered species while some of the forests richest in biodiversity in the world are disappearing under the noses of disinterested local officials.

Indonesian activists described by Zuckerman (local voices feature prominently in his book) say that while it is true that the industry has created wealth, much of it has been sucked into cities and bank accounts. prominent politicians, encouraging patronage, corruption and other evils. . (I read his book in tandem with that of Vincent Bevins The Jakarta Method, which is investigating the CIA’s links to the 1965 mass extermination of land reformers, trade unionists, and communists in Indonesia, and it was impossible not to feel the story casting a sick shadow over its current narrative.)

Planet Palm also looks at the health effects of palm oil – namely, the growing epidemic of obesity and heart disease in India and other parts of the developing world, where it is growing used to produce low cost snacks. As the costs of palm oil have entered public consciousness, public relations battles are being fought in consumer markets over what ethical production looks like and who decides. For Indonesia, the anti-palm oil campaign is an existential threat, and Zuckerman describes the retreat of the industry and its lobbying firms, which call the backlash “green neocolonialism,” designed to protect the old industries from vegetable oil in the West of competition.

To heal ourselves of the idea that there is something inherently sinister about palm oil itself, we also meet its traditional custodians and see how they relate to the world market differently. . In the Brazilian state of Bahia, for example, practitioners of African descent candomble use the oil in everything from carefully cooked dishes to ritual offerings to their deities. Formerly known as the “petroleum people”, candomble the faithful recover it from before the time when it was painted on the body of their ancestors to hide the wounds acquired during their passage on the slave ships.

In all, Planet Palm presents the palm oil industry as an alternate representative of the evils of the capitalist world economy. Forged in colonialism, refined by the labor and technological innovation of the previous two centuries, and now expanding in a multitude of hands across the planet as a twin force of wealth generation and astonishing ecological devastation, it does There are no simple answers to the consequences of its increase, but no possibility of leaving it unchanged either. Arguments over what this change should look like continue to boil over, most recently in the wake of the EU’s decision to ban palm oil as a biofuel and recriminatory trade war threats made by Indonesia and China. Malaysia in response.

For readers looking for a good introduction to the palm oil battlefield and how it is made, Planet Palm is an enlightening read, as captivating as it is instructive. Those who take the time will understand palm oil as a force in modern history and see how the world map has been stained with red oil, as George Goldie once said he wanted Nigeria is.

Banner image: A man stands in front of a bunch of fresh oil palm fruit bunches in the smoky and fiery haze near Palangkaraya, the Indonesian capital of Central Kalimantan. Photo by Bjorn Vaughn.