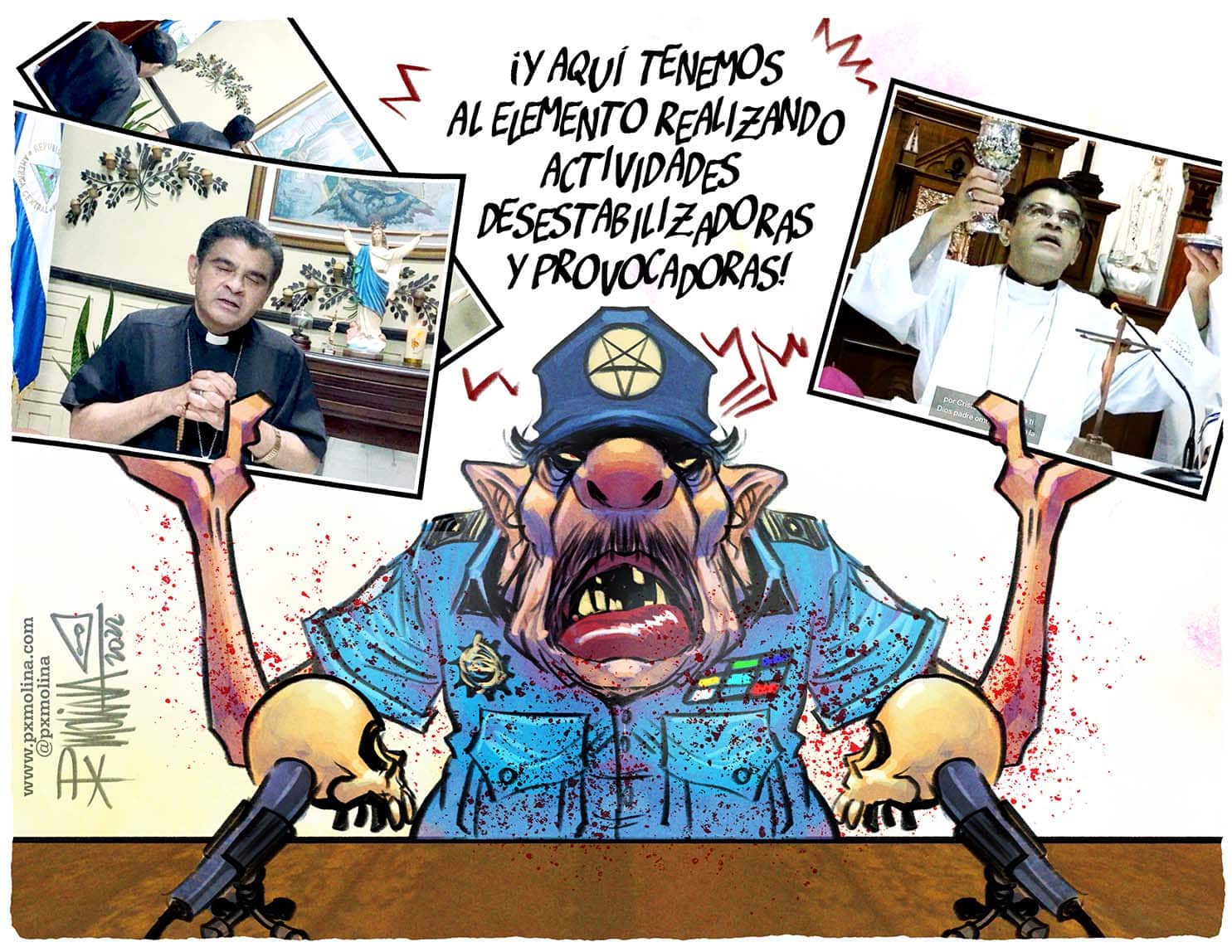 What is the Vatican’s “diplomatic operation”? Humberto Belli: “If the bishops accepted that he leaves Nicaragua, it would be a surrender.

HAVANA TIMES — Daniel Ortega and Rosario Murillo are pushing for Bishop Rolando Alvarez — Bishop of Matagalpa — to be sent out of the country. This is the scenario that costs the regime the least politically, five experts on church-state relations in Nicaragua agreed. An adviser to the papal curia also indicated that there is a “diplomatic operation” underway by the Vatican, involving Cardinal Leopoldo Brenes, who is both archbishop of Managua and vice-president of the Episcopal Conference.

Experts believe that the option of keeping Bishop Alvarez illegally detained in his home is “embarrassing for the dictatorship”. Worse still would be to try to condemn this religious leader – whose charisma, prestige and ecclesiastical stature are indisputable – to serve a sentence in El Chipote jail.

Sociologist Humberto Belli doubts that Pope Francis will intervene and order Alvarez to leave the country, as he did in 2019 with another religious leader very critical of the government: Silvio Jose Baez, at the time bishop deputy of Managua. Belli thinks it is unlikely to happen again, due to the criticism the pontiff’s decision has inspired in the latter case. “The Holy Father does not want to repeat this experience, according to sources close to the Holy See with whom I have spoken,” Belli said.

Belli, a former education minister in the 1990s, says current circumstances should force the Episcopal Conference of Nicaragua to take a more active role. “To accept that the bishop leaves Nicaragua would be to surrender to the government. What they need to do is demand that he be released. It’s unfair that he has to leave, it’s unfair to imprison him. They have no reason to punish him in any way.

In the early morning of August 19e, special police troops stormed the Episcopal curia of Matagalpa where Alvarez was being held, along with five priests, two seminary students and a cameraman from the diocesan press team. Monsignor Alvarez is now under house arrest in Managua, the cameraman has been released, a priest has been left in the curia of Matagalpa and the others have been taken to the notorious El Chipote prison in Managua.

“The government will have to consider two alternatives: the first – to continue to hold him prisoner, possibly under house arrest for an extended period, as has been the case with Cristiana Chamorro and a few other political prisoners. Or, two – kick him out of the country. It is an action they have in their hands, since they can expel anyone from the country legally or illegally, and they have already done so. With this move, they would come out of the weight of having a prisoner in the country with the prestige and ecclesiastical stature that Alvarez has,” Belli asserted.

In a press release, the police claimed to have carried out the operation against Alvarez in order to restore the supposed “normality” for the citizens and families of Matagalpa. They accused the religious leader of carrying out “destabilizing and provocative activities”.

On August 5, authorities announced they had opened an “investigation” into Alvarez, accusing him of “organizing violent groups” and “fomenting hatred.” The police had already surrounded the Episcopal curia of Matagalpa and a large contingent of police was preventing them from leaving, an event that upended daily life in the city.

In the August 19 statement, police also said that those who accompanied the bishop to the curia at the time of the police attack had been transferred to the prison in Managua, known as El Chipote. The facility has been denounced by national and international human rights organizations for torture and inhumane conditions.

The police left only one parish priest in the curia, without detaining him: Father Oscar Escoto of the Santa Maria de Guadalupe church in Matagalpa. The authorities announced at the same time that Cardinal Leopoldo Brenes, archbishop of Managua and vice-president of the Episcopal Conference, had been authorized to visit Alvarez, now under house arrest. In a later statement, church authorities in Managua confirmed the reunion and noted that Alvarez was suffering some physical effects from his ordeal, but his spirit remained strong.

A “diplomatic operation” on the part of the Vatican?

Rodrigo Guerra, secretary of the Pontifical Commission for Latin America, told the Catholic News Service Online Aleteia that the Vatican is carrying out a “diplomatic operation” through Cardinal Leopoldo Brenes, in order to find “a way out” of the situation with Monsignor Alvarez.

There has been some mistrust over the Cardenal’s possible role, with some lamenting his “lukewarm stance” in the face of continued domestic turmoil. Humberto Belli, for his part, thinks “it is possible” that Brenes would ask the Pope to order Monsignor Alvarez to leave the country, with Ortega’s blessing.

Lawyer Martha Patricia Molina, author of an investigation into the regime’s attacks on the Catholic Church, argued that it is possible that the dictatorship sought Brenes – or vice versa – to send a message to Alvarez: that he must leave his country. free will. This, if it happened, would amount to a banishment.

Molina also criticized the Nicaraguan Episcopal Council for its “absence and indifference to its responsibilities in the problems of the persecution of the Church”. “I wouldn’t know what the impact on them might be [of a possible departure of Alvarez]. But for the Church in general, it would come at a high cost, because he has a prophetic voice,” she said ruefully.

At the time of the initial detention, the Episcopal Conference issued a statement calling the event “a deep wound that we suffer as a Church in Nicaragua”. The statement added: We pray for Alvarez and those accompanying him to the Curia.

Sociologist Elvira Cuadra, director of the Center for Transdisciplinary Studies of Central America [Centro de Estudios Transdisciplinarios de Centroamérica]believes that the regime is pushing for Alvarez to leave the country, because keeping him locked up means generating more discontent among the population.

Cuadra believes that the Vatican’s choice of Brenes, instead of Monsignor Herrera, president of the Episcopal Council, corresponds to the official channels of the Church. The Cardinal is the head of the Archdiocese of Managua and has maintained some level of communication with the authorities of the dictatorship.

She called any negotiations that may take place regarding Alvarez “underground,” but foresees a political cost to the Episcopal Council because there has been no firm statement from the bishops.

“For the government, the cost is very high, because the discontent of the people increases, whatever arrangement they make with the bishops. People feel disrespected and they won’t be able to change that. »

Two other analysts consulted by Confidential on a promise of anonymity added that the situation with Alvarez is “evolving”. However, they both felt that what Ortega did was not politically right for him at all.

Of all the possible scenarios, these two interviewees thought the least likely outcome was that Alvarez would end up in jail at El Chipote, because in this case, it would continue to attract national and international attention. They think the dictatorship will lean towards the option of banishing him.

The bishop has become a symbol

One of these Confidential spoke with said that, if the departure of Alvarez becomes a fact, it is true that internally Nicaragua will lose a prophetic and critical voice, but we have gained a “symbol of a courageous and determined man of a great integrity”.

“I have no doubt that the diplomatic mission involving Brenes is to ‘save the life of Alvarez’, and they will lead [Brenes] to get him out of the country, which is one of the regime’s objectives. Think of the other priests, though. What will be the “diplomatic operation” for them? If it’s to get them all out, it’s a victory for the regime. The sheep will be left without shepherds,” the source insisted.

Another of those consulted added that the departure of Alvarez would be the most rational outcome for Ortega, but she regretted the very heavy blow it dealt to the Catholic Church. If that happened, the dictator would thus have won “another round”, and the impact on the citizens would be yet further demoralization and the loss of another valiant voice.

The police operation against Alvarez leaves the Matagalpa clergy headless. It also affects the faithful of the Church, who felt supported by the bishop. For one interviewee, it seemed possible that the collaborators of the religious leader had been sent El Chipote as a means of pressuring the Catholic hierarchy to accept the government’s terms in a possible negotiation. The other speculation is that the ruling FSLN simply punishes people without logic, because it hurts everyone. This is their repressive style.