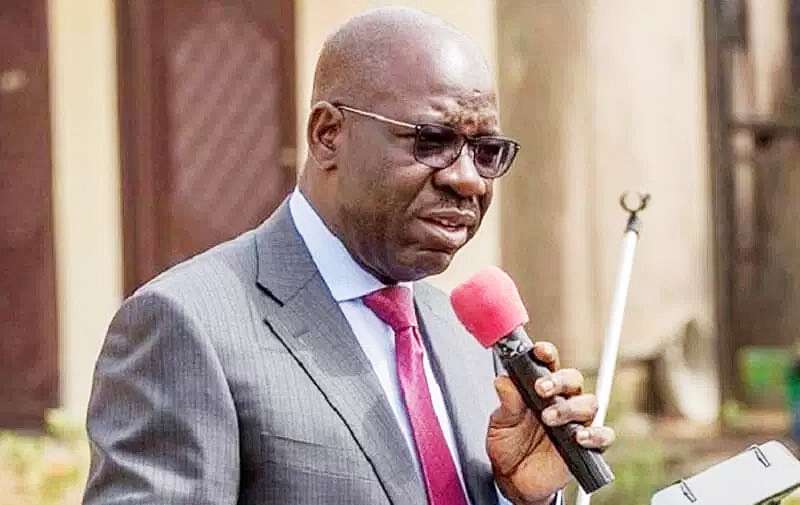 Obaseki painted Wike in unflattering colors and used a few select words to describe him.

For example, he called Wike a bully, but quickly reminded him that Edo State does not tolerate bullies and has the ability to tame such characters.

Obaseki: “In Edo, we do not accept political bullies and overlords, and historically we have demonstrated our ability to break free and dethrone bullies and authoritarian rulers”

Wike had, with his usual brutality, publicly threatened Obaseki’s deputy governor, Philip Shaibu. He accused Shaibu of ingratitude for allegedly threatening the People’s Democratic Party, PDP, on national television. Wike chastised Shaibu for daring to say that there is an alternative to the PDP.

Shaibu had complained that those of them who, along with Obaseki, had joined the PDP after being, literally, expelled from the All Progressives Congress, APC, and deprived of a second, had not been fully accommodated. by the PDP.

However, Wike scolded Shaibu, reminded him how they knelt down begging to be greeted by the PDP. He wondered who gave him the courage to threaten the PDP, harassed him for wearing khaki and asked, “Who is his father?” He also threatened serious disciplinary action against the deputy governor and revealed that he had petitioned the national party chairman against Shaibu.

But Obaseki, stopping short of calling Wike an emperor, said if anyone is a threat to the PDP, it’s Wike. He gave examples and reminded him that he, Wike, is not the owner of the PDP, nor the property of the Wike Party.

He revealed Wike’s presidential ambition and told him that the way to go was not to intimidate people and destroy the PDP. “You can’t get Edo,” Obaseki told Wike.

He accused Wike of destroying the PDP in Cross River State, which all but confirms speculation months ago that the state’s Governor, Professor Ben Ayade, left the PDP to the APC due to Wike’s alleged intimidation.

Here is the full text of Obaseki’s response to Wike.

“Recent personal attacks by His Excellency, Governor of Rivers State, Rt. Hon. Nyesom Wike, against my Deputy Governor, Rt. Hon. Comrade Philip Shaibu is, to say the least, the most unfortunate and totally out of place.

“If Governor Wike were someone who is used to showing respect and courtesy to fellow governors, he would normally have contacted me to express his concerns about the opinions expressed by my deputy governor, rather than to embark on this unwarranted public attack.

“My Deputy Governor was a former National President of the National Association of Nigerian Students (NANS) and his comment is representative of the essence of the country’s youthful population, who are inclined to speak out and question If Governor Wike cannot adequately understand and respond to the style and character of Nigerian youth, how can he aspire to lead them?

“His Excellency, Governor Wike should have taken inspiration from the way our party’s national chairman, Senator Dr. Iyorchia Ayu, responded to my deputy’s remarks, as a conscientious leader capable of empathizing and consideration.

“The concerns expressed by my Deputy Governor touched on pertinent issues affecting the PDP in Edo State which since the elections of September 19, 2020 has been able to register over 500,000 members; and to date, these new members have not been properly integrated into our party after two years.

“Furthermore, the leaders, cadres and members who came with me into the party have still not been accepted, integrated or harmonized into the party.

“More worrying is the fact that former members of Edo PDP, who are open to inclusion and support building a great party, are being vilified and ostracized by a cabal allegedly led by leader Dan Orbih, who is your a perpetual guest in Port Harcourt and is being used remotely to orchestrate party destabilization in Edo State.

“It is necessary to recall at this point that a political solution resulted in the emergence of Leader Dan Orbih first as Acting National Vice President and then as Substantive National Vice President, South- South, from our party, when Chief Emma Ogidi resigned from that position to allow Chief Orbih to ascend.

“So it is curious why this kind of political solution is no longer tenable to resolve the political stalemate in Edo State PDP.

“We can categorically say that in the Deputy Governor’s comments, he did not at any time threaten the party as alleged by Governor Wike. Rather, it was Governor Wike who at various times threatened the PDP. Some of these cases include:

“1. On September 16, 2018, Governor Wike threatened the party that there would be serious consequences if it moved the National Convention from Port Harcourt in the run-up to the 2019 presidential election.

“2. On September 12, 2019, Governor Wike also threatened to cause problems for the party over the emergence of Hon. Ndudi Elumelu as Minority Leader of the House of Representatives.

“Without a doubt, Governor Wike has helped the party move forward, as have others, since 1999.

“Nobody is against his desire to run for the presidency, however, his ambition should not be undertaken in such a way that it would cause disruption at different levels, such as the PDP Governors Forum as well as different chapters of the gone across the country.

“It clearly amounts to a delusion of grandeur, for a man to harbor the idea that he owns or has more of a stake in the PDP and that everyone should flatter him.

“We are all equal stakeholders in the party and an aggregate of the ideas, opinions and contributions of all leaders and members should form the position of the party and not the point of view of one individual or a privileged few.

“While Governor Wike is free to use his resources as he sees fit in pursuit of his ambition, he should not attempt to bully, intimidate, cajole and threaten others into doing whatever he wants.Edo State cannot and will not be bought for anyone’s personal ambition.

“What Nigeria needs now are strong democratic institutions, not strong men; that is why we will join with the great leaders of our party across the country to make the PDP a strong, broad and indomitable party that will win the presidential election next year.

“Governor Wike and his aides led by Chief Dan Orbih in Edo State will not succeed in destabilizing the PDP in Edo State as they have done in other states like Cross River just to get delegates to fulfill his supposed personal ambition to run for president in 2023.

“In Edo, we do not accept political bullies and overlords and historically we have demonstrated our ability to break free and dethrone bullies and authoritarian rulers.

“I call on all well-meaning leaders of our great party to call Governor Wike to order, to desist from his current unguarded and disruptive tendencies. From all indications today, PDP is poised to take the leadership of Nigeria provided we can harness the self-interest of a few leaders to place the task of saving Nigeria above their personal ambitions.