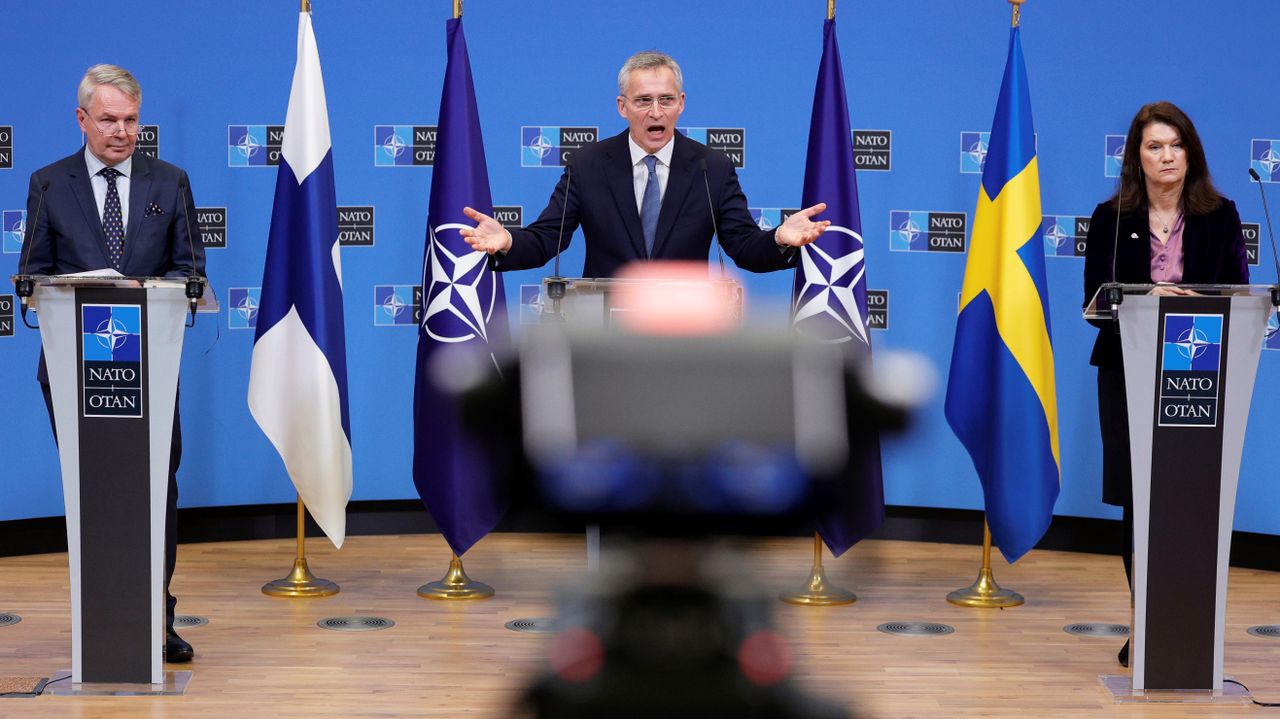 The NATO alliance is preparing a vast escalation of its proxy war against Russia in Ukraine and of imperialist wars and intrigues around the world. This emerged from two summits held this weekend in Germany by the foreign ministers of NATO and the G7 group of the world’s richest countries: the United States, Germany, Great Britain, the Japan, France, Italy and Canada.

Yesterday, Finland and Sweden confirmed that they would join NATO against Russia. Sweden’s ruling Social Democrats have said they will apply to join NATO, after Finland said it would this week. “Today the Swedish Social Democratic Party has taken the historic decision to say yes to an application for NATO membership,” tweeted Swedish Foreign Minister Ann Linde, as Prime Minister Magdalena Andersson s is committed to “ensuring that there is broad parliamentary support in the Riksdag for a Swedish membership application.

The official fairy tale that NATO is helping innocent Ukraine against an unprovoked Russian invasion is dissolving as NATO uses Ukraine to justify a radical overhaul of global geopolitics. Indeed, remarks by NATO Secretary General Jens Stoltenberg at the closing of the NATO summit made it clear that long before Russian President Vladimir Putin ordered an invasion of Ukraine in February , NATO was arming Ukraine as a proxy against Russia.

“NATO is stronger than ever. Europe and North America are firmly united. Ukraine can win this war,” Stoltenberg said. He added that “NATO Allies have engaged and provided security assistance to Ukraine worth billions of dollars, and over the years NATO and Allies have trained dozens of thousands of Ukrainian forces. It all makes a real difference on the battlefield every day.

Stoltenberg was echoing former US Army Europe commander Ben Hodges who said Washington should declare that in Ukraine “we want to win.” Hodges also called for “breaking Russia’s back”.

Stoltenberg said it was part of a global expansion of NATO operations: “Ministers also discussed our upcoming summit in Madrid. We will take important decisions to strengthen NATO’s deterrence and defense to reflect the new security reality in Europe; to continue to support and engage with like-minded partners near and far; and to adopt our next strategic concept, NATO’s blueprint for an era of strategic competition.

An outline of NATO’s new strategic concept was published in the G7 foreign ministers’ communiqué on Saturday. This gigantic 30-page document is not in fact a summary of the discussions at the summit, but a sprawling list of demands from the most powerful imperialist countries to almost the entire globe. It concerns Russia, the former Yugoslavia, the Indo-Pacific zone, China and the East and South China Seas, Myanmar, Afghanistan, Libya, Syria, Iraq, Palestine, Yemen , the Horn of Africa, Somalia, Sudan, Ethiopia, the Sahel, Gulf of Guinea countries, Venezuela, Haiti, Iran and North Korea.

On the war in Ukraine, the G7 statement aims above all, beyond Russia itself, at China and Belarus. He denounces Belarus as an “accomplice” in the war by “allowing Russian aggression” and warns that Belarus has not “respected its international obligations”.

The G7 is calling on China to suspend trade with Russia, which faces heavy US financial sanctions, and drop its claims in the South China Sea. It orders China “not to undermine the sanctions imposed on Russia” and “to refrain from engaging in manipulation of information, disinformation and other means to legitimize the war of aggression of Russia against Ukraine”. It also tells China to give “immediate, meaningful and unhindered access to Xinjiang and Tibet”, two strategic regions in western China, to UN officials and other observers.

On Russia, the G7 declares: “Russia has violated the Charter of the United Nations… and will have to face the consequences of its actions. We reject any notion of spheres of influence and any use of force inconsistent with international law. We will never recognize the borders that Russia has attempted to alter through military aggression, and we will remain committed to supporting the sovereignty and territorial integrity of Ukraine, including Crimea, and all states.

What NATO is proposing is a worldwide eruption of imperialist militarism. In the 30 years since the dissolution of the Soviet Union by the Stalinist bureaucracy in 1991 eliminated the main military counterweight in NATO, it has engaged in a neocolonial rampage. It has bombed, staged coups against, invaded or militarily occupied the territory or officials of virtually every country listed in the G7 communiqué. NATO wars like those that destroyed Iraq, Afghanistan, Libya, Syria and Mali have cost many millions of lives.

Putin’s decision to respond to NATO’s arming of Ukraine with a preemptive invasion is reactionary, but one obvious point must be made: NATO’s condemnations of Russia for violating international law reek of hypocrisy. From the illegal US-British invasion of Iraq in 2003 to its unilateral bombing of Syria in 2017, NATO has given up claiming that its wars are governed by international law.

Workers must take NATO’s military escalation against nuclear-armed Russia and the megalomania of its geopolitical ambitions as an urgent warning. As the war in Ukraine drags on and the Russian military consolidates its military grip on largely Russian-speaking areas of southern and eastern Ukraine, the danger of an uncontrolled military escalation between NATO and Russia , ending in all-out nuclear war, is rising day by day.

It is increasingly clear that for NATO to “win” the Russian-Ukrainian war, as Stoltenberg and Hodges demand, it will have to attack Russia directly. The integration into NATO of Finland, with its large army and its 1,300 km border with Russia, and the constant pace of NATO war games along the Russian borders show that preparations for a such a reckless and suicidal policy are well advanced.

The force that must be mobilized against the growing danger of a nuclear World War III is the international working class. This includes, in particular, the Russian and Ukrainian working class, mobilized on the basis of the Bolshevik revolutionary traditions that led to their unification a century ago in the overthrow of capitalism and the construction of the Soviet Union.

The massive difficulties and suffering caused by NATO’s war against Russia are preparing revolutionary eruptions of the class struggle on an international level. The G7 foreign ministers called for the creation of a “Global Food, Energy and Finance Crisis Response Group”, stating: “The geopolitical landscape has fundamentally changed. Russia’s unprovoked and premeditated war of aggression has exacerbated the global economic outlook with a sharp rise in food, fuel and energy prices.

Around the world, strikes and anti-government protests like the mass movement in Sri Lanka demanding the overthrow of President Gotabhaya Rajapakse are on the rise. The G7 declaration on the food crisis is yet another political fraud: it blames Russia for the food crisis, threatening hundreds of millions of lives, which NATO played a central role in creating.

The central banks of the United States, Japan, Britain and the European Union are freezing hundreds of billions of dollars of Russia’s foreign exchange reserves, making it impossible to pay Russia in dollars for its products on world markets. While the Russian invasion prevents a large part of Ukrainian grain from reaching world markets, the draconian NATO sanctions have thus made it impossible to export Russian grain and fertilizers. Lithuania, a NATO and EU member state, has also blocked the export of potash from Belarus through its ports.

NATO’s growing war threats against Russia and its reckless undermining of world food supplies underscore that the survival of billions of people depends on the political mobilization and international unification of working people against imperialist war in a struggle for the socialism.