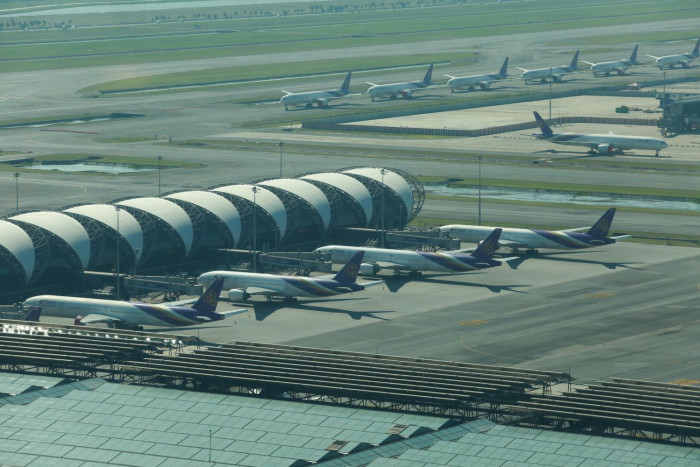 Exim Bank has not yet submitted any proposals

A fleet of Thai Airways planes is parked at Suvarnabhumi International Airport. The aviation sector has been hit hard by the Covid-19 pandemic. Somchai Poomlard

Finance Minister Arkhom Termpittayapaisith has responded with many reservations to government calls to provide soft loans as a lifeline for struggling airlines.

The Export-Import Bank of Thailand (Exim Bank) has been tasked with devising a financial measure to help airlines, but the bank has yet to submit its proposal to the finance ministry, Arkhom said.

Giving soft loans to airlines or making such commercial loans to the civil service account means that the finance ministry has to pay the difference between market interest and interest on soft loans, he said.

Other sectors may also urge the government to provide loans if the administration offers low-rate loans to airlines.

Airlines appeared to be gradually recovering before the second outbreak of Covid-19 in Thailand emerged, and more scrutiny of each airline needs to be done to assess the scale of the impact, he said.

It was reported in January that Exim Bank planned to offer a loan measure to the finance ministry in early February, aimed at boosting liquidity for crippled airlines in order to retain their employees.

The aviation industry is one of the sectors most affected by the pandemic, as countries impose strict restrictions on foreign arrivals due to a persistent increase in infections across the world.

Thai AirAsia is reportedly only keeping a quarter of its staff, asking the rest to take unpaid leave for four months, starting in February, as a second wave of the epidemic hits the aviation industry.

The leave, the second in recent months, is bigger than the first round at the end of last year.

Nuntaporn Komonsittivate, head of business operations at Thai Lion Air (TLA), said the airlines have teamed up and asked for a government bailout since April 2020.

Even though most of them wanted to guarantee the low rate loans, the airlines did not include this loan in their future plans because the program had been delayed several times over the past year.

“We couldn’t just wait aimlessly. The airlines have already streamlined their operations to reduce our fixed costs. If the government can’t allocate financial aid, we have to find plan B on our own,” said Mrs. Nuntaporn.

Prior to the new outbreak, low-cost carriers saw a positive outlook for domestic routes, with travel demand gaining positive momentum from the third quarter.

However, lockdowns in many provinces caused the average load factor to drop to the lowest point in January.

The average TLA figure this month has just increased to 30%, but it remains low compared to the normal situation.

“Most of us will have a hard time finding another way to stay afloat. It could be worse if another wave of Covid hits,” Ms Nuntaporn said.