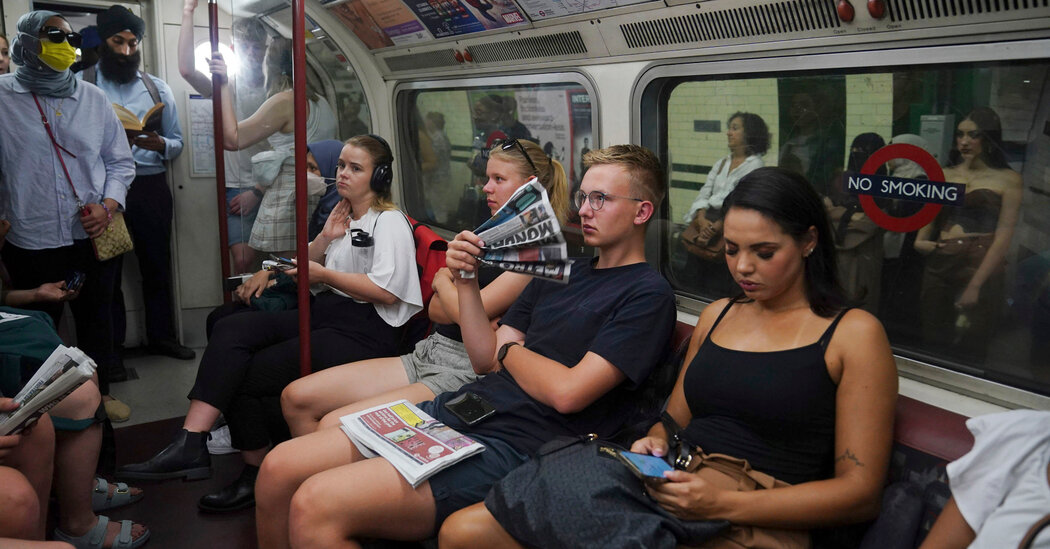 LONDON — England faced the possibility of a serious disruption to its transport networks on Monday as temperatures were set to soar to new all-time highs.

Temporary speed restrictions were in place on large parts of the network, including on the London Underground system. Entire lines have preemptively canceled service over fears forecast extreme temperatures will cause the rails to buckle. And bold red warnings have been posted at stations and on social media urging people to reconsider their journeys.

But despite warnings to only take the most necessary journeys and advice urging would-be commuters to stay at home, many Londoners felt they had no choice but to use the London Underground network. town and other trains on Monday morning.

Rufus Cameron, 26, who lives on the third floor of a shared house in north London, had decided to escape the city heat to his parents’ home in southern England and was waiting for a train on Monday morning.

“Our apartment is hot, outside it’s hot, it’s a bit too much,” he says. “In England we have no idea how to deal with this kind of heat.” While he said he was worried about potential delays to the national rail service bringing him home, he hoped that leaving before the temperatures rose too steeply would save him any trouble.

“But what can we do with the infrastructure we have in England,” he added. “It’s not made for that.”

In London, where some of the most extreme temperatures are expected – Tuesday’s forecast calls for a high of 103 degrees Fahrenheit – a number of Tube lines saw service suspended on Monday and Tuesday, according to a statement from Transport for Londonwho operates the network.

Only 40% of the Tube network is air-conditioned, and Transport for London has advised passengers to carry water and consider timing journeys for the cooler parts of the day.

National rail services were also bracing for disruption to thousands of miles of steel track, which absorbs heat easily and can warp, causing serious delays. Steel rails expand when heated and can push against adjacent pieces of track, which can also damage equipment that detects where trains should keep them at a safe distance, according to Network Rail, which owns and repairs railway infrastructure in England, Scotland and Wales. .

In a report, the company warned of delays, cancellations and last-minute changes to train services on Monday and Tuesday. It also closed the entire East Coast Main Line, which runs between London’s King’s Cross station and York and Leeds, on Tuesday afternoon.

“Closing the line to traffic is always a last resort, but it’s the right thing to do to keep people safe on Tuesday given the unprecedented heatwave forecast,” said Sam MacDougall, Network Rail’s chief operating officer. , in a press release. “The forecasted temperatures are well above what our infrastructure is designed for, and safety must come first.”

Train speeds were also restricted on Monday, a measure that would limit the number of trains running and significantly extend journey times, Mr MacDougall said, urging passengers to “only travel if absolutely necessary”.