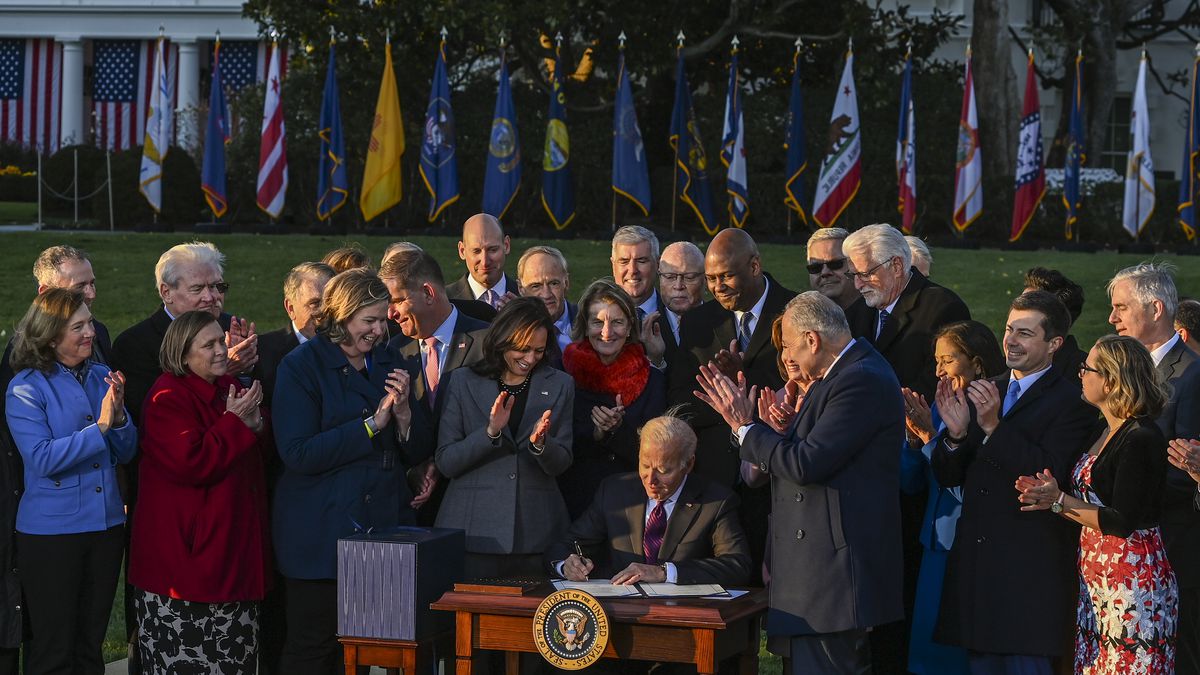 After four years of near silence on climate change in the White House, 2021 has brought abrupt change. President Biden has made this one of the defining issues of his presidency, proposing ambitious efforts to replace fossil fuels with clean energy sources and leading a global campaign to reduce greenhouse gases.

But by year’s end, it emerged that the most important of those proposals had crashed into a wall of opposition from Republicans in Congress and one notable Democrat – West Virginia Senator Joe Manchin. And at a world summit, efforts to tackle climate change lagged behind promises to do so.

On the first day of his tenure, Biden announced that the United States was joining the 2015 Paris Climate Agreement, in which nearly 200 countries agreed to drastically cut their collective greenhouse gas emissions. Months later, the Biden administration released a plan to limit the nation’s net greenhouse gas emissions, economy-wide, to at least 50% by 2030 and to zero. by the middle of this century.

Throughout the year, Biden has called climate change a crisis. “It is a moral imperative, an economic imperative, a time of peril, but also a time of extraordinary possibilities. Time is running out, but I believe we can do it,” he said in a statement. climate conference with other countries in April.

When Biden or someone in his administration spoke about climate change, they almost always focused on the jobs that could be created through this transition to cleaner forms of energy. It could also mean many jobs lost in the fossil fuel industry. But in the pursuit of the legislation, job creation was a constant goal.

Biden tried to give his climate plan the force of law

The most important parts of Biden’s climate plan ended up in two massive pieces of legislation. Congress passed one of them, a $ 1 trillion infrastructure package that some Republicans also backed. It included $ 7.5 billion to build electric vehicle charging stations as well as money to expand long-distance transmission over the electricity grid, key to delivering renewable energy from where it is generated to cities. where it is used.

The bulk of Biden’s climate agenda, however, lay in a larger spending bill that has stalled in Congress. A centerpiece of that plan was a â€œClean Electricity Performance Program,â€ which would have paid utilities to switch to renewables and nuclear and penalized those who did not make the transition quickly enough. The coal industry would have been the big loser in this program. Manchin, who owns a coal business, publicly rejected the plan in mid-October, and it was quickly removed from the bill.

Two months later, Manchin announced his firm opposition to the whole simplified bill. He justified his position with several false claims about climate change, including the idea that a rapid transition to renewables could lead to blackouts, like those experienced in Texas and California. These problems were mainly due to the failures of power companies to prepare for extreme weather events.

The failure of the Biden administration to get its most ambitious climate proposals to Congress also undermined its efforts to ensure global leadership at a landmark United Nations climate summit in Glasgow, Scotland, in November.

The summit spurred a series of new emission reduction commitments from some countries, the largest coming from the United States. Additionally, China and India have released new targets that didn’t seem impressive at first glance – they pledged to achieve zero emissions by 2060 and 2070, respectively – but those targets still represent a substantial change for both countries. , which are heavily dependent on coal.

Groups of nations have pledged to cut emissions of methane, a potent greenhouse gas, by 30% over the next decade, and to end deforestation. Rich countries have also pledged to provide more money to developing countries to help them adapt to climate change and build clean energy systems, although these pledges have failed to meet the demands of lesser countries. rich.

Yet all of these promises still fall far short of what is needed to achieve a key Paris Agreement goal: reducing greenhouse gas emissions enough to limit global warming to less than 2 degrees Celsius (3 , 6 degrees Fahrenheit) and ideally 1.5 degrees C (2.7 degrees Celsius) degrees Fahrenheit), compared to pre-industrial times. The conference agreed to require countries to return in 2022 with more ambitious plans to reduce emissions.

The experience of the Biden administration, however, suggests that it is easier to set goals than to achieve them. There is political opposition to moving away from fossil fuels in many countries, not just the United States.

What’s next for the US climate agenda

With Congress blocking this new legislation, the Biden administration is looking for other ways to meet its emissions reduction targets. This could include new climate-focused White House decrees and rules. On Monday, he announced he would increase mileage standards for new cars – a significant step given that transportation is now the largest source of greenhouse gas emissions in the United States.

These measures face an uncertain future, as conservative Supreme Court justices have been skeptical of the White House’s efforts to expand its authority under existing laws.

Despite the obstacles the Biden administration encountered, it was able to radically alter the national debate on climate change in 2021. Policies are now in place or being the subject of serious discussion, which were not even on the table. table in recent years. And billions of dollars are starting to flow into infrastructure projects that aim to fundamentally change the way the country produces and uses electricity.