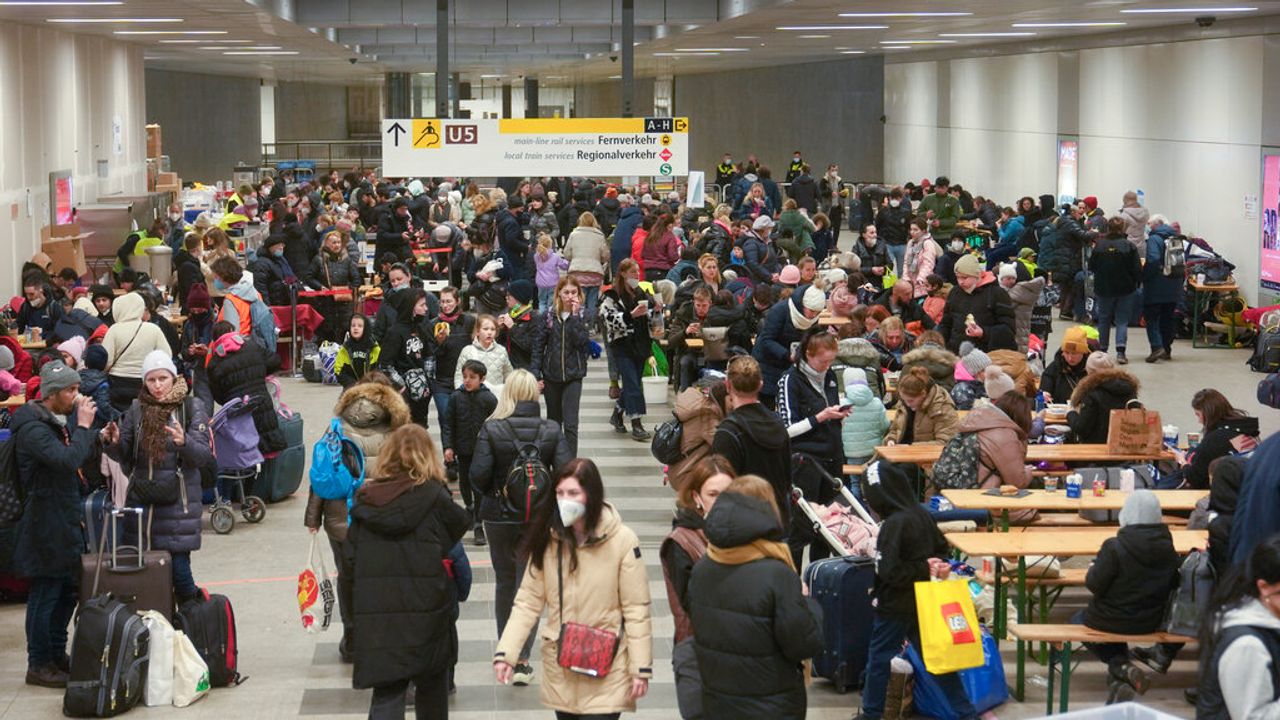 According to the United Nations High Commissioner for Refugees (UNHCR), more than 2.5 million people have fled the country on foot, by car, by bus or by train since the outbreak of war in Ukraine on February 24. Their main destination so far is Poland. , where a large majority – more than 1.5 million people – currently live; hundreds of thousands continue to flee west.

In Germany, more than 110,000 Ukrainian refugees have been officially registered since the start of the war. More than 80,000 refugees have officially arrived in the capital Berlin. There is no way to confirm the number of so-called undeclared refugees, that is, people hosted by relatives or friends.

As in 2015, when tens of thousands of people sought refuge from wars in the Middle East, particularly in Syria, workers in Berlin responded with overwhelming solidarity from the start, even with more than 10,000 arrivals some days.

On the other hand, the “reception structures” allegedly set up by the Land government, the Berlin Senate, were initially barely visible; they have since collapsed. Images of refugees arriving at Central Station during the early days of the conflict were an immediate reminder of the state’s failure to address the 2015 refugee crisis.

At that time, refugees lined up for days in the heat of summer at the State Office for Health and Social Welfare (Lageso). Today it is the State Office for Refugee Affairs (LAF). They waited without water or shade to register in order to acquire the right to food and housing.

The fact that the disaster of that time has not yet been repeated is not due to the ruling parties, the Social Democrats, the Left Party and the Greens. Rather the opposite!

Berlin’s aid organizations and hundreds of volunteers met the arrivals at Berlin Central Station and the Central Bus Station (ZOB), provided them with basic necessities, provided them with accommodation or organized a “bed for the night”. with other supporters.

The aid organization Moabit hilft eV, which rose to prominence worldwide during the 2015 refugee crisis, openly denounced the “terrible food situation there” at the start of the first week. There are “unfortunately only sporadic individual deliveries from the Senate”, the organization reported, and therefore “currently no sufficient supply of food and water”.

“Up to 20 hours a day”, the volunteers fight “so that a humanitarian catastrophe does not take place, they organize medical care, organize donations in kind, coordinate and distribute people throughout the city, drive people to accommodations, arranging and arranging accommodation, arranging security and arrivals…” wrote Moabit hilft eV on their Facebook page .

The two main politicians in the Senate, Franziska Giffey (SPD), the mayor of Berlin, and Katja Kipping, the senator for Integration, Labor and Social Affairs (Left Party), dismissed the criticism.

In unison, they underline the “enormous challenge” (Giffey) faced with the flow of refugees, the “historic responsibility” (Kipping) that the State of Berlin could not “assume alone”, and issue some symbolic criticisms of the responsibility of the federal government. In an interview with the Berliner ZeitungKipping expressed his “endless” gratitude to the “volunteers” and promised that “we will gradually take on more responsibility for the situation at Central Station”.

On the regional rbb news program last Sunday, Giffey reacted with extreme irritation when the presenter referred to the strong criticism of the Senate in recent days and asked why there had been virtually no representatives of the ‘State at Central Station. Giffey replied, visibly struggling, “So you know, I find that question, frankly, embarrassing!”

The ruling class has a problem. It exploits the suffering of the refugees when it comes to advancing its own plans for rearmament and war against Russia. At the same time, it became clear after just a few days that they treat refugees from Ukraine little better than the hundreds of thousands of people who fled the Middle East to Germany during the 2015 refugee crisis. .

The nervousness of the ruling parties also stems from the enormous deterioration of the social and political situation throughout the country and, in particular, in the capital, which has more than 3.6 million inhabitants.

The impoverishment of much of the population, caused by decades of austerity, property speculation, an extreme lack of affordable housing and soaring rents, has been exacerbated by the pandemic politics of the ruling class.

Faced with the housing shortage, the majority of the population voted in a referendum to expropriate the housing companies, which the government coalition rejected. The government is now faced with the problem of housing war refugees. This will further aggravate the serious housing problem faced by the entire labor force.

During its second term, the coalition failed to alleviate housing shortages or end homelessness, nor was it able to move already stranded refugees from Syria, Afghanistan , the Middle East and parts of Africa from residential containers and refugee shelters to decent apartments.

More than half of the refugees housed in the state-run housing – some have lived there since 2015 – have official residency status and are therefore entitled to their own apartments.

At the end of last year, 98% of the accommodation of the State Office for Refugees was already occupied, which is why the closed container houses had to be reused and the temporary houses at the Tempelhofer airfield and a container village in Pankow had to be reopened.

Although refugees from Ukraine are welcomed by warmongering parties for political reasons, they resort to hostels, churches, vacant buildings and five new temporary houses to house them. The sports halls have not yet been occupied as in 2015. However, the established practice of collective housing without the slightest minimum of privacy and with insufficient sanitary facilities has already been reactivated.

On Friday, 360 refugees were welcomed into the Berlin exhibition hall. Hundreds of sleeping places are being created at the former Tegel airport. More than 400 field beds have been set up as emergency quarters in Terminal 5 of the former Schönefeld Airport building.

As the Berlin Senate debated a plea for military help, Giffey firmly rejected the declaration of a state of emergency, demanded by district offices due to overwhelming demand for their services. .

This would, for example, make it possible to requisition housing for refugees. In addition, it would be easier to involve employees and volunteers from the administration and the companies in support and to obtain “the necessary materials, such as tents, beds and portable toilets” despite “the restrictions of expenditure within the framework of the current provisional budget planning”, because the Tagesspiegel Put the.

Contrary to the Senate’s obvious reluctance to care for the desperate and traumatized, Berliners have taken in many refugees despite their own, mostly very cramped, living conditions. the Tagesspiegel refers to a “difficult-to-understand mass of people” staying in private homes.

The hypocrisy and racism of the state government was crowned by the evacuation of the temporary houses where the refugees lived in Berlin-Reinickendorf, in order to create space for new arrivals from Ukraine.

Tareq A. of the Berlin Refugee Council last week announced on Twitter that families, some with school-aged children, should vacate their homes within 24 hours and move to another distant location. The State Office for Refugees was not interested in the fact that families were driven from their homes and children were taken from their classes. These people are obviously “second-class refugees!” »

The forced evacuation of refugees has been heavily criticized and horrified on social media. “It’s all amazing! How is that possible, @katjakipping? I have no idea how anyone can come to such a decision…” a poster said. Another commented: “You could probably only go so far if there are good refugees who are wanted and those you can’t bother to look after.

On Social Senator Kipping’s Facebook page, Halina S. strongly denounced Die Linke’s “humanitarian aid” and explained: “As always, the government’s commitment is always at the expense of the weakest. This is nothing less than an absolute scandal…”

The forced evacuation of the refugees was “a totally reckless and absolutely re-traumatizing move, both senseless and thoughtless. The people who will bear the emotional costs are clear: the volunteers, the refugees, the psychologists, the doctors, who have worked with people for years to stabilize them; but certainly no one who stands on the podium of the Berlin Senate and gives speeches. I am absolutely outraged at how your actions most seriously harm people and how years of work are destroyed. But this is not new to the Senate.

In fact, the refugee policy of the Berlin Senate is inhumane and corresponds in essence to the line of the far-right Alternative for Germany (AfD). The Berlin Refugee Council pointed out earlier this month that the notorious deportations under Interior Senator Andreas Geisel (SPD) continued under his successor Iris Spranger (SPD).

From January 2021 to January 2022, 1,126 people were evicted by the Berlin Interior Ministry, of which 645 were arrested by the police between midnight and 06:00. in December 2021 and January 2022, when winter evictions on humanitarian grounds are supposed to be avoided.

The deeply human solidarity with refugees among the population contrasts sharply with the murderous policy of “fortress Europe” supported by all parties represented in parliament. The hypocritical and publicized policy towards refugees from Ukraine cannot hide this fact.

After three decades of wars led by the United States, the outbreak of a third world war, which would be fought with nuclear weapons, is an imminent and concrete danger.