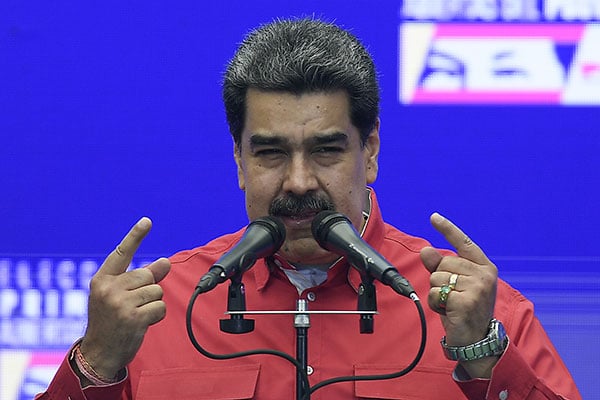 Predicting the criminal dynamics for 2022 is even more difficult than most years, as it involves predicting the course of the coronavirus. Organized crime does not exist in a bubble. It is linked to the global economy and the free movement of goods and people, and the pandemic is wreaking havoc on both.

The only thing that Covid-19 and the economic and social crisis that accompanies it have ensured is that the fight against organized crime has fallen lower on the list of government priorities in the Americas. Government budgets – battered by economic contraction and rising health care spending – are less devoted to the fight against organized crime. All of this is accompanied by a rise in political instability and autocratic tendencies in the region, which have undermined democracy, transparency and resilience to criminal activity. Allied to the perennial problem of corruption, these models will ensure that transnational organized crime (COT) has an open playing field in the region for much of 2022.

Perhaps the only thing slowing it down is the coronavirus itself. The latest variant, the omicron, is raging across Europe, resulting in further restrictions on movement and travel. The United States is preparing for it and Latin America and the Caribbean will soon feel the effects. As a result, the destination markets for Latin American criminal products, primarily drugs, may well experience disruption, although likely less than in 2021, given how markets have adapted to the pandemic over the years. time.

Yet even as international travel and transportation are once again disrupted, drug production in Latin America, led by cocaine, continues to increase. Colombia, Peru and Bolivia collectively produce more than 2,100 tonnes of cocaine in 2020, which is probably an underestimate. Coca fields have been discovered outside of major cocaine-producing countries, including Ecuador, Mexico, Honduras, Guatemala and Venezuela. InSight Crime’s field research in Venezuela uncovered industrial-scale coca plantations in three Venezuelan states.

With an increasing supply, the US cocaine market saturated and transport blocked, the trend of opening new routes to different countries is expected to continue. Led by the Colombian drug trafficking organizations (DTO), new markets outside the United States have been developed, not only in Europe, but in Asia and Australia.

This trend will continue in 2022 as products accumulate in the Andean region, while demand remains stable in key consumer markets in the United States and Western Europe. The eastern expansion of the European Union has opened up additional markets, and traffickers continue to monitor China, with the world’s largest population and growing disposable income.

The expansion of the reach of criminal groups in the region’s ports is linked to these new markets. While containers from Colombia, Ecuador and Brazil are regularly searched for drugs, DTOs use ports in other countries to insert cocaine into shipments. Ports in Costa Rica, Chile and distant Uruguay are increasingly targeted by criminal groups, all seeking to bypass interdiction efforts.

Political instability, violence and the lack of economic opportunity are expected to worsen in early 2022 and will lead to more displacement and migration, mainly north to the United States. Haiti is the perfect example: the country is going from crisis to crisis, with a security situation that has worsened since the assassination in July 2021 of President Jovenel Moïse. Criminal gangs are now holding much of the country hostage, especially in the capital Port-au-Prince. Given that there is currently little functioning government and that victory in the elections slated for 2022 largely depends on the cooperation of gangs, the continuation of a criminal regime in one form or another is likely.

The Northern Triangle nations of Honduras, Guatemala and El Salvador produce a constant flow of migrants, while Venezuela appears poised to challenge Syria as the world’s worst refugee crisis; some six million Venezuelans, a fifth of the population, have left the country. Organized crime attacks, exploits and recruits these migrants, ensuring that international networks of human smuggling and trafficking grow and strengthen in 2022.

The growing attention of Mexican criminals on synthetic drugs and opioids is expected to continue into 2022. The market for marijuana, once a staple for Mexican DTOs, has collapsed, thanks to increasing legalization in the United States . Mexico’s heroin industry is also in decline, judging by production levels.

Cocaine remains a mainstay of the Mexican cartels, but with the fragmentation of Colombian DTOs, combined with the lure of higher yields and less risk of exporting drugs to other parts of the world, Mexicans are struggling. to ensure an adequate supply. Synthetic drugs, especially methamphetamine and fentanyl, are a booming market in the United States and increasingly in Europe, and Mexican DTOs are adjusting their production accordingly.

There is some good news. The United States has placed corruption and the fight against transnational organized crime at the center of its relations with the region. The determination that the fight against corruption is a central US national interest could have profound implications in Latin America and the Caribbean. The United States is already targeting key people in Central America and worrying other corrupt leaders and officials in the region. The creation of the United States Council on Transnational Organized Crime (USCTOC) could also have a significant impact on the region, as the United States realigns its investigative priorities and resources to focus on the myriad of threats it faces. presents the COT.

However, the United States has fewer partners in the struggle than before, especially when it comes to fighting corruption and strengthening democracy. While Colombia and Panama remain staunch allies and there is a new recruit in Ecuador, other parts of the region are less enthusiastic about joining up to fight the COT. Venezuela, Cuba, Bolivia and Nicaragua remain largely opposed to US interests, while Mexico, once a key ally, has shown little appetite to work with the United States in the fight against drug trafficking. which has profound implications for bilateral relations.

Another crucial former ally, Peru, faces chronic political instability, which the election of President Pedro Castillo in July 2021 did nothing to improve. Castillo was set to face impeachment proceedings amid widespread accusations of corruption and incompetence. Currently, the world’s second-largest cocaine producer has neither the will nor the capacity to implement serious policies to contain TOC.

Paraguay is not doing much better, plagued at every turn by corruption while producing record amounts of marijuana for the giant Brazilian market and becoming a major transit nation for cocaine en route to Europe. Even the normally stable Chile has seen a left-wing candidate gain power, and President-elect Gabriel Boric may not be inclined to back US efforts.

While Colombia, Mexico and Brazil are home to the region’s most powerful criminal groups, other countries, notably Venezuela, contain criminal strongholds. There, President Nicolás Maduro defied all expectations and consolidated his power in the country. The regional elections in December strengthened its political control. Maduro has also managed to circumvent many of the international sanctions imposed and keeps his regime afloat by selling oil to partners like China, Russia and Iran, while extracting the gold as quickly as possible and processing it. in hard currency.

Maduro also put in place a system to regulate the cocaine trade which will be the subject of the first investigation published by InSight Crime in 2022. Dollarization has not only brought under control the stagflation created by the endless printing of banknotes. A worthless bolivar, she guaranteed that illegal dollars and euros can be spent freely in the country. But since Venezuela is largely isolated from the international financial system, money laundering is still limited there. Presidential elections don’t take place until 2024, which means Maduro, now more politically secure than ever, can focus on raising revenue and capturing as much criminal rents as possible.

Maduro could also find new partners, some of whom have implemented his predecessor Hugo Chávez’s playbook of how to undermine a democracy even while nominally remaining one. The best example is Salvadoran President Nayib Bukele. In addition to stacking the courts and the justice system with his allies, Bukele has turned his back on the United States and appears ready to partner with street gangs and pariah states, if that gives him more power in the long run. . He also stunned the region when he decided to make Bitcoin legal tender in 2021, alongside the US dollar. Bitcoin and other cryptocurrencies are increasingly accepted across the region and, with few safeguards in place, will remain a good tool for paying criminal partners and laundering proceeds.

The erosion of democracy and the continuing pandemic have also opened the door to criminal governance in many parts of the region. Large swathes of Colombia remain under DTO and guerrilla control. Brazil’s prison gangs continue to expand in Bolivia and Paraguay as well as at home. Venezuelan criminal groups work alongside government officials and assume state functions. And Mexican criminal groups have de facto become the rulers of entire municipalities. In short, 2022 may look strangely like 2021, except for worse.