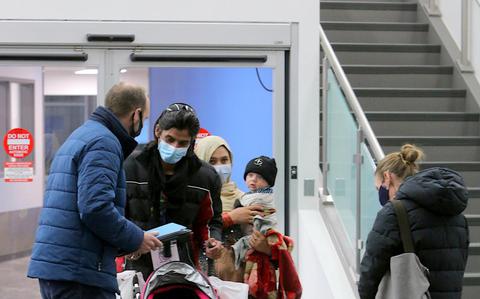 FREDERICK, Md. (Tribune News Service) – It was a Sunday, Shogofa Sojjani easily remembers. August 15, 2021. She was at home in Kabul.

Then the message arrived from the American embassy: the Afghan government had collapsed, the Taliban had taken control, and Sojjani had to go to the airport immediately. So she fled, alone, walking through streets lined with armed soldiers and wearing only a few clothes.

Born and raised in Jowzjan Province, northern Afghanistan, Sojjani had studied biology at university before working as a translator for the Americans in 2016. She couldn’t take any identifying material with her that day. there, even less his studies or professional certificates. – if she had been arrested and searched, she explained simply, she would have been shot.

After 10 days at the Kabul airport and over three months in a refugee camp in New Mexico, Sojjani moved into an apartment in downtown Frederick. Attracted to western Maryland by a cousin in Hagerstown, she has since held a community health position at the Asian American Center in Frederick.

“I’m here,” she said on Tuesday afternoon, smiling warmly even after recounting the terror that had gripped her that summer day and the lonely months that followed. “And I am alive.”

About 100 more Afghan refugees who are still camping at military bases across the United States will settle in Frederick before the end of February, said Matthew Carr, director of the nonprofit Lutheran Social Services of the National resettlement agency. Capital Area (LSSNCA).

Like Sojjani, they will need shelter, jobs and community support. Locals took charge, collecting furniture, running cultural programs and volunteering to help newcomers navigate everything from getting a driver’s license to enrolling their children in public school. .

But one area turns out to be the most difficult: obtaining permanent housing.

“It’s going very slowly,” said Betsy Bainbridge, who helped form the Resettlement Welcoming Committee (RWC), a coalition of faith groups and nonprofit associations in the Frederick area. “The housing situation is tense and dear to Frederick.”

Many landlords are reluctant to rent to recently settled refugees, Bainbridge and Carr said, even when supported by aid groups who will ensure they pay rent. New residents need time to find a job and receive a pay stub that they can present to a landlord. They may not have government issued ID. Most of them do not speak English fluently.

â€œIt forces owners to understand their situation and anticipate that they will be good customers,â€ Bainbridge said.

Later this month, the LSSNCA will open its first office in Frederick County, Carr said. The group has had one in neighboring Prince George County for almost 20 years. Meanwhile, relocation officials have built relationships with owners and owners of apartment complexes in the area, meaning that when they need to find accommodation for a family, they know where to go. turn.

But this is not the case with FrÃ©dÃ©ric.

â€œWe kind of start downstairs here,â€ Carr said. “We don’t have a lot of these resources.”

Incoming refugees are scattered across the country at the moment, completing their papers and vaccinations in camps on U.S. military bases, Carr said. Some come to Frederick because they have a close friend or relative nearby, as Sojjani did. Others are simply placed where there is room: every state and every major resettlement agency has a defined capacity.

Carr and his colleagues cold-call property managers across the county, explaining their cause and asking if they would consider housing a refugee family. He tells them that the LSSNCA can guarantee at least eight months of their rent.

Still, at the rate they evolve, the group will likely have to move families to hotels or Airbnbs first, Carr said.

â€œBecause it’s kind of a crisis at the time – because we have so many people to move out in a short period of time – we are using temporary housing,â€ Carr said. “But ideally we would be able to get permanent housing right away, having it fully in place by the time of their release date.”

When Sojjani arrived in Maryland, she stayed with her cousin in Hagerstown for about two weeks before moving into her apartment in Frederick. She shares the house with a family of three, one of whom was a colleague of hers in Kabul. The four of them are the only Afghan refugees recently settled in the Frederick area to date, RWC volunteers said.

Sojjani is grateful for the company of her roommates and for finding a network of people who take care of her. It helps her not to miss her family too much. Her mother and two sisters are still in Kabul.

Under the Taliban, they are not allowed to do most public sector jobs or attend secondary school. They cannot travel long distances without a close male relative, which they do not have.

Sojjani sometimes thinks of them when, after work, she finds her apartment temporarily vacant. Each time, she feels alone, and each time, it is painful.

â€œIt’s a different culture, different people,â€ she said. “Everything is new to me here.”

Wais Insaaf, RWC member and secretary of the Frederick Islamic Society, said he hopes to focus his volunteer efforts on helping Afghan refugees find cultural comfort once they arrive. As many of them will be Muslims, he will make sure they know where the local mosque is located and when they can expect to attend services. It will help them prepare meals and find familiar groceries.

The RWC and LSSNCA will also help newcomers register for English classes, search for jobs, schedule medical appointments, and take advantage of local resources like public libraries and the YMCA.

Originally from Afghanistan itself, Insaaf came to the United States as a teenager. As he worked to prepare for the arrival of the refugees, he said – like the other volunteers – that accommodation was his biggest concern.

Rentals in the town of Frederick – especially those close to downtown – are often prohibitively expensive, Insaaf said. Refugees might find cheaper prices in more rural areas of the county, but that would not be feasible for people who would likely depend on walking or public transport for shopping or commuting to work.

Rebecca Shillingburg and Mehra Blott, two other volunteers from the RWC community, said that helping welcome the refugees was a deeply personal cause for each of them.

Shillingburg’s son was in the US special forces, she said, and served in Afghanistan three times. Without the work of the interpreters and other Afghans on the ground, he could not have done his job safely.

And as a woman, she said, she feels an added obligation to help those who have been forced to flee for fighting against the oppressive and misogynistic Taliban regime.

Blott, who speaks Farsi, said she was able to meet Sojjani and her three roommates. Since then, she has become even more determined to rally the community around them and the incoming refugees.

â€œThey are really interested in working, getting back on their feet and being a part of the community,â€ said Blott. “It’s a great group of people.”