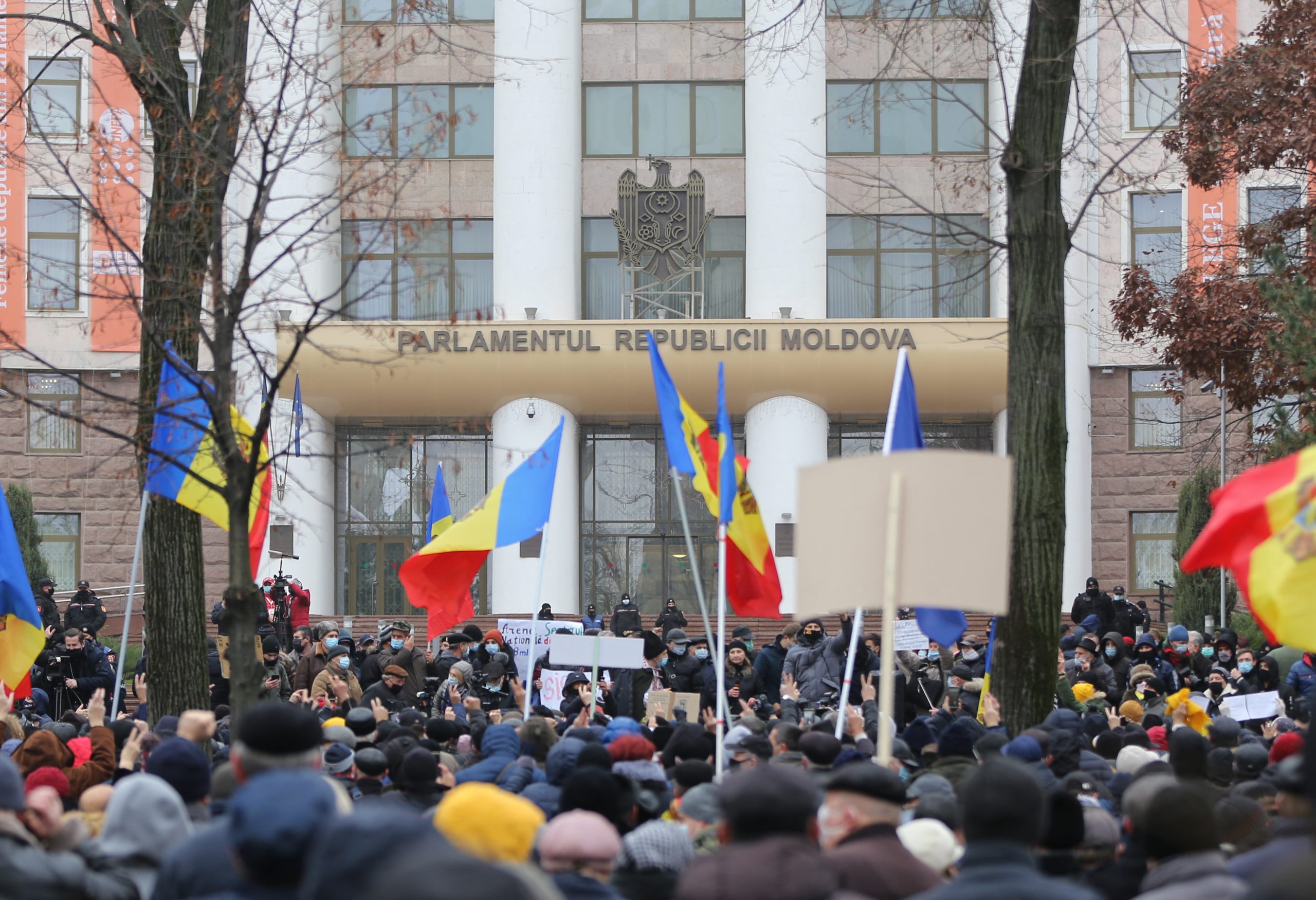 In one of the flowerbeds in Esteban el Grande square, in the center of Chisinau, a light blue flag of the European Union, with its 12 stars, welcomes office workers who bang on its cobblestones, a bunch of kids who enjoy of a winter walk and a few MPs hurrying to the Soviet Moldovan Parliament, white and wide. Authorities placed the banner last May, Europe Day, and it remained there, between a sculpture of the famous 15th-century Prince of Moldavia, the sculpture of the Russian writer Alexander Pushkin and a bust of the Romanian romantic poet. Moldovan Mihai Eminescu. A whole metaphor for the small country wedged between Romania and Ukraine, where since independence from the Soviet Union three decades ago, political battles have been fought between groups who want more proximity with their Romanian neighbor or with the EU and those who rely on closer ties with Russia.

Moldova’s geopolitical orientation has oscillated cyclically between Brussels and Moscow. It is one of the poorest countries in Europe, with less than three million inhabitants, a population impoverished by emigration, an economy still vulnerable, high levels of corruption and a pervasive disillusion among political elites. and economic. Today, 50% of the public supports EU membership while 33% are against and look to Russia, according to the Public Opinion Barometer.

For the Kremlin, Moldova is a strategic country. President Vladimir Putin, with his expansionist policies and his aspirations to return to Russia the role of great superpower that the USSR had, is trying to maintain his influence over the former Soviet republics. And in Moldova, it has important political and economic ties that serve as levers. Like its role as sole gas supplier, underlines energy expert Sergiu Tofilat.

In November, in the midst of the global energy crisis caused by rising prices, the pro-EU Moldovan government declared a state of emergency after its agreement with Russian gas company Gazprom expired and it did not was able to close a new one at prices the small country could afford. . Chisinau had paid 170 euros for 1,000 cubic meters and paid 680 euros. â€œClear blackmail and punishment against the new government,â€ says Tofilat. “Moscow is running the gas tap to undermine the credibility of the new executive and to open windows of influence in the population which add to electoral interference and its propaganda in the media,” he said. The Kremlin and Gazprom have assured that everything surrounding the Moldovan gas crisis is due to economic disagreements.

Join MRT to follow all the news and read without limits.

Also in Brussels, they saw the gas chapter as the movement of one of Moscow’s most powerful tentacles, trying to gain a foothold in the country after pro-European technocrat Maia Sandu, a former World Bank official 48 years old, took the presidency. Last year, Kremlin ally Igor Dodon and his party, Action and Solidarity, swept parliamentarians away last July. After weeks of crisis, Chisinau ended up concluding an agreement with Gazprom for 400 euros per 1,000 cubic meters over five years. A price much less advantageous than the one that the Russian giant signed with Belarus or Serbia, which pays around 238 euros. Despite this, the contract has aroused suspicion from analysts, who believe the Kremlin has attempted to secure significant concessions from Chisinau, such as curbing the push to move closer to Brussels. Already when Moldova signed the Association Treaty with the EU in 2014, Moscow restricted Moldovan imports.

The government of Prime Minister Natalia Gavrilita, a reformist trained at Harvard, has denied any concessions. And just a few weeks ago, Sandu, who repeated that Moldova wants to “build a Europe at home” as a navigation formula between Moscow and the West, also clarified that the country wants to be a member of the EU “un daytime”.

Alina Yunuspecova believes that Moldova should not choose between Russia and the community club. In an aesthetic cafe eco-hipster From the center of Chisinau, the 26-year-old graphic designer assures us that the road to enter the EU is long and with few guarantees; and that the ties with Moscow are quite strong. â€œI don’t like politics very much, but now we’ve seen how the gas problem affects us,â€ he says. Yunuspecova was among tens of thousands of Moldovans who left the country, expelled by the economic crisis and low wages (the average wage is around 350 euros per month). Although after some time in the Baltic States he decided to come back and look for opportunities at home, he says in Russian. Romanian is the country’s official language and is spoken by four-fifths of its inhabitants (according to 2014 data), but Russian is also widely spoken.

The EU has not given great hopes for membership to Moldova, which has not yet launched a series of substantial reforms in the economy, good governance and justice, to even be nominated as a candidate. But Brussels – which delivered an unprecedented economic stimulus package of some 600 million euros to Chisinau this summer – is trying to maintain close ties and collaboration with Moldova and the rest of the countries of the East and the Caucasus. Not only because of the benefits for the Union of maintaining democratic-minded neighbors in such a strategic area, but also because of the Russian force, which has another important element of influence in Moldova, an anchoring in a region which is turning more and more to the West. : Transnistria.

The conflict in Transnistria

The region on the left bank of the Dniester River, recognized as part of Moldova by the international community (including Russia), declared itself independent in 1990. 31 years later, it is still trapped in war cold. After the brief war of 1992 in which hundreds of people died, Moscow financially supported Transnistria, where there was a predominantly Slavic population (Russians and Ukrainians), which organized several referendums for independence and to join Russia .

The territory has become something of a Soviet-aesthetic theme park – although this has nothing to do with communism and the vast majority of businesses are in the hands of Viktor Gushan, the local oligarch, and his holding business Sheriffâ€”, And in something like a Russian protectorate, which maintains in the enclave several bases and more than 1,500 soldiers that the Kremlin defines as “peacekeepers”, who also watch over the former powder magazines of the USSR. It is a military contingent that worries a lot. And even more so now when Western intelligence warns of a possible new Russian aggression against Ukraine. A few months ago, President Sandu reiterated her request to Moscow for the withdrawal of the soldiers, but the Kremlin warned that changes in the the status quo of the region could “seriously destabilize” regional security.

In Tiraspol, the capital of Transnistria, in all official buildings the Russian flag flies with that of this region. Tatiana Yegorova, 68, and her husband, Yuri, 80, don’t even want to hear about it. “You never know if there might be another conflict and with the ‘peacekeepers’ we feel more secure,” said Yegorova, a retired programmer. In the enclave, which in Soviet times housed much of the industry in the republic, is also Moldova’s main power station. Its multi-million dollar debt for the gas that powers it is one of the points of contention between Chisinau and Gazprom. And the price of gas is cheaper in Transnistria than in other parts of the country: one ruble for nine, say the Yegorovs. In the living room of their apartment, next to the shelves filled with a large collection of Russian classics that Yegorov enjoys so much, the couple assure that there are people from Chisinau who spend the winter in Transnistria, about 90 minutes by car. car, at energy prices. A story that the local television (in the hands, like everything else of the owner of the holding Sheriff) and also the Russian commentary regularly, although the Yegorovs don’t know anyone in this situation.

In Moldova, underlines Ana Mihailov, director of the Friedrich Ebert Foundation in the east of the country, a â€œvision of development and an overhaul of the economic modelâ€ are necessary. Thanks to European funds and loans from the International Monetary Fund (IMF), Chisinau has undergone an in-depth facelift, renovated many buildings and is working to improve the country’s roads, still eminently rural.

But while macroeconomic stability and the painful transition of state-dominated economies to new avenues has been difficult, rooting out endemic corruption is even more difficult, experts say. Moldova ranked 115th out of 180 in Transparency International’s Corruption Perceptions Index in 2020 (number one being the least corrupt). It is also a challenge to increase confidence in the institutions of a population traumatized by scandals like the one known as the “heist of the century”, in which more than 1,000 million dollars (the equivalent of one-eighth of gross domestic product) have disappeared. . the country’s top three banks in 2014, causing an unprecedented crisis. Moldovan justice has already indicted several politicians and businessmen for this scandal; and now he is looking for the oligarch Vladimir Plahotniuc, one of the strong men of the country, a big donor to the Democratic Party and who left the country a few years ago, in the midst of a scandal.

Nicu Popescu, analyst at the European Council on International Relations, believes that it was mainly his hard-line speech against corruption that gave Maia Sandu’s party its significant victory, which has garnered the votes of pro-EU and also voters without preferences. specific but profound policies. tired of constant scandals. The Action and Solidarity Executive has also launched a technological development plan.

Engineer Anatoli Golovco assures that the growing sector of new technologies can be one of the strengths of the country. “Another of our advantages are relations with Russia, we could be a bridge,” said Golovco, a university professor and businessman, in a restaurant in Chisinau, as his wife, Irina, watched. specialized translator who has converted into a stylist. . Pragmatic, the couple also speak enthusiastically about the Sandu government and its anti-corruption program at all levels, from the one that led to the heist of the century to the bites of doctors or middle-class officials. â€œWe lacked a vision of the country, we are still building ourselves,â€ explains Irina. â€œChanges take time, sometimes you don’t see the quick result, but it’s there, they’re here to stay,â€ he concludes.

Disclaimer: This article is generated from the feed and not edited by our team.