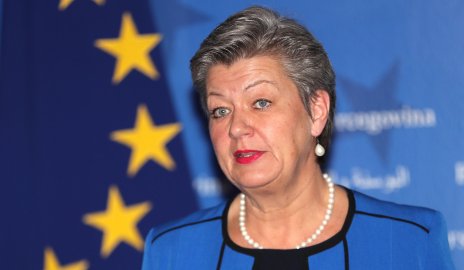 EU Home Affairs Commissioner Ylva Johansson has announced that Ukrainian nationals who choose to return to their home country as the war with Russia continues are allowed to return to the EU. She added, however, that data on who was coming and who was leaving was not yet readily available.

During a visit to the Ukrainian capital, Kyiv, Johansson stressed that Ukrainian nationals seeking refuge in the EU were allowed to come and go as long as Russia’s war in their country continued.

“Rest assured, whatever happens during the war, Ukrainians will always be warmly welcomed in the EU,” she confirmed in a tweet.

2/2 …nearly 3.9 million Ukrainians have been registered in the EU under the TPD.
I am here to see how best to facilitate support in the EU and Ukraine, including those returning home from the EU
Rest assured, whatever happens during the war, Ukrainians will always be welcomed in the EU

However, she added that Ukrainians returning to Ukraine for permanent resettlement should instead forego making use of their temporary protection status in the EU.

“I think it’s a very big improvement that so many Ukrainians are now deciding to return home and rebuild Ukraine,” she commented in Kyiv.

Johansson also added that as long as the war continued, no one could be sure what it really meant to settle permanently again, which is why she said the EU would also allow Ukrainians to return. in the EU at any time and to re-register. for temporary protection.

Johansson also said it was unclear at this stage how many Ukrainians had returned to their country permanently since the start of the Russian invasion. She only said the EU had ‘so far seen extremely few people opting out’, adding that there were plans underway to improve information on the number of people who have returned to Ukraine permanently. .

According to the UN Refugee Agency, UNHCR, nearly 3.8 million Ukrainians in total have already sought protection in the EU. This number does not include residents of Ukraine without a Ukrainian passport.

Movement in both directions

Following Russia’s invasion of Ukraine in late February, the EU quickly agreed to offer protection to Ukrainians fleeing the war. As part of the agreement and as a sign of solidarity, he also decided to reduce the red tape normally associated with asylum applications.

Under this programme, all Ukrainian citizens are offered temporary protection in the 27 member states of the European Union, giving them the opportunity to move and work freely in the EU while benefiting from access to public health care, housing and education for their children.

Since the beginning of the war, more than six million Ukrainians have fled their country and headed towards the EU; However, of late there has indeed been a trend of returning to the country to help rebuild their lives, as fighting between Russian and Ukrainian forces appears to have diminished in recent weeks.

Johansson said during her trip to Ukraine she saw first-hand proof of this, seeing a long line of Ukrainians waiting to go home at a train station on the Polish-Ukrainian border.

Johansson’s announcement, however, stands in stark contrast to the treatment of other asylum seekers and refugees who have been granted protection status in the EU. Generally, a person fleeing persecution under conditions of war is not allowed to return to their country of origin, as this would imply that they never needed protection in the first place.

Hundreds of thousands of Syrian and Afghan refugees fleeing long-running conflicts in their countries have made their way to the bloc over the past decade; however, unless they obtain special dispensation from the government, which offered them protection, they cannot return home to the country from which they originally sought protection.

Advocates, NGOs and even the UN have questioned this rationale because in some circumstances an asylum seeker simply does not have time to go through the bureaucracy involved in applying for a special permit. to return briefly to his country of origin. Some have even pointed out that there could be a double standard at play.

For example, many Muslim refugees must refrain from attending the funeral of a close family member because, under Islamic law, the dead must be buried during the day.

Since the start of the war in Ukraine and the subsequent acceptance of Ukrainian war refugees into the EU, the bloc has applied two different sets of standards in the treatment of people fleeing the conflict, with some critics claiming that the European Union grants a preferential treatment. to those seeking to flee the war in Ukraine.

Read more: The Escape Diaries: “I want to go back to Ukraine”