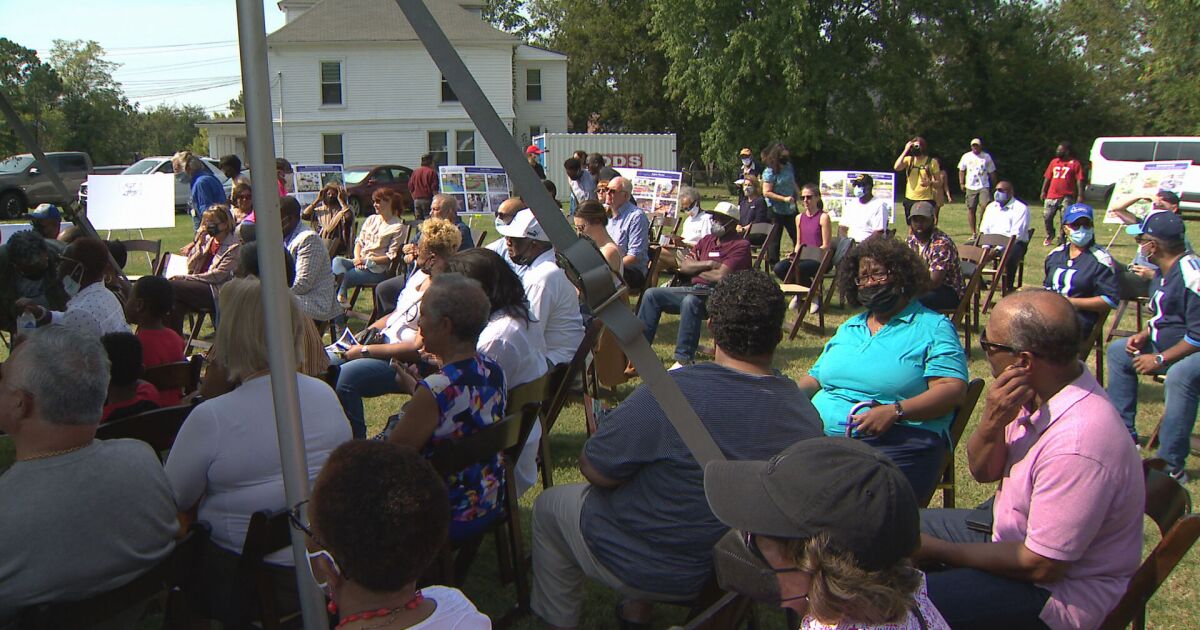 NASHVILLE, Tennessee (WTVF) – Sometimes spirits erupted at a community meeting Saturday afternoon, held on land owned by Lee Chapel AME in North Nashville. The meeting was about a proposal to spend millions of, mostly federal, dollars to reconnect parts of North Nashville, divided decades ago by the construction of Interstate 40.

“Do you hear that?” Metro City Councilor Sharon Hurt said as neighbors listened to the roar of cars. “It’s the highway.”

The buzz of traffic seemed to be a constant during the meeting, hosted by the new Nashville Department of Transportation. A reminder of how we got here. “It brought us to ruin. It took away the ability to pass on generational wealth,” said Reverend Ronnie Mitchell of New Livingstone Church in East Nashville.

In the 1960s, construction of I-40 forced 1,400 landowners, mostly African-Americans, to withdraw from 100 blocks of North Nashville, killing businesses and plunging a thriving community.

Decades later, the scars remain. “The noise is too loud, Fisk’s approach is not correct, we have damaged our HBCUs by letting the I-40 be designed and built in a way that is just annoying, and frankly choked the business community here, “said Mayor John Cooper, in an interview with NewsChannel 5.

So, to help right this historic wrong, the city is considering applying for a federal grant to create what’s called a cap on the acres of the highway. Think of it as a huge green space on a bridge above the road surface.

NDOT installed signs around the meeting to show what the new space could be used for, such as an amphitheater, garden or public park. In turn, Mayor Cooper hopes this will bring more business to the neighborhood. â€œThe cap can get a black entrepreneur to build a good piece of land on Jefferson Street because you’ve created an environment where that business is going to thrive,â€ Cooper said.

But just like the constant roar of the highway, neighbors’ concerns about the proposal seemed to only intensify.

“How does that help us in terms of black businesses and ownership and that sort of thing?” asked a speaker.

â€œAnd what I’m going to say, Mayor, I’m not going to fight it, I’m saying we rethink it and reimagine it,â€ Reverend Mitchell said.

“I don’t agree with the way the mayor’s office has handled this process,” said council member Hurt.

Hurt went on to say that the city started on this proposal last year, without the neighborhood’s contribution. “If we are not at the table, we are on the menu,” she told the crowd, to applause.

Hurt is also concerned that the project will have unintended consequences. â€œWhen the cap comes up and it makes it beautiful here and it’s absolutely wonderful and the value goes up, then people are going to be moved because they won’t be able to afford it,â€ she said.

We have communicated these concerns to Mayor Cooper. He argues, first and foremost, that this meeting is a chance for the community to come to the table and it is only just beginning. â€œI guess respectfully I don’t agree because – we just said grace at the table and we’re just getting started,â€ the mayor said.

As for the threat of gentrification. â€œThis is of course a concern, and we need a plan for it, but the current situation is not very good either,â€ Cooper said.

Much like the noise from the nearby freeway, the rumbles about this project aren’t going to go away anytime soon. â€œBut it will be up to the community to decide what that looks like and whether or not to pursue the candidacy,â€ Cooper said.

A majority of the interstate cap project would be paid for through federal transportation subsidies. This meeting was the first of several community meetings about the proposal. If the Cooper administration decides to proceed, the request must be submitted to the federal DOT by next March.