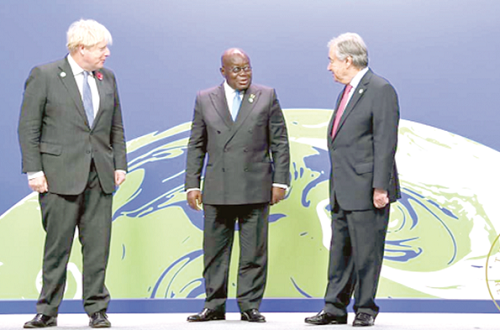 African nations at the recently concluded COP26 climate summit in Glasgow, Scotland, criticized rich countries for failing to keep their pledge to give billions of dollars to help them tackle climate change.

It was a rare demonstration of unity of purpose and a strong, united voice of African leaders on such a broad international platform.

Western countries considered to be the most advanced have had to rely heavily on fossil fuels to industrialize. It goes without saying that if rich countries ask emerging economies to reduce their dependence on fossil fuels for their industrialization, then rich countries must do more so that African leaders can meet their commitments to build schools, hospitals. , roads and other shapes. infrastructure for their people whose income would otherwise come from the chimneys of the factories that the West is asking Africa to downsize.

The cost-benefit analysis of Africa’s abandonment of fossil fuels at such an infantile stage of our industrialization as a continent raises many questions.

The richest nations in the world – the G-20 – are responsible for 80% of greenhouse gas emissions. However, scientists say poorer countries, especially in Africa, are suffering the worst effects of climate change.

Rich countries pledged in 2009 to give developing countries $ 100 billion a year to help them tackle climate change, but the target date was pushed back to 2023 at the start of the COP26 summit.

Summing up Africa’s disappointment, President of Ghana and President of ECOWAS, Nana Addo Dankwa Akufo-Addo, did not mince words when he said: “These same nations, however, insist that we abandon the country. opportunity for rapid development of our economies. This would be tantamount to entrenching world-class inequalities in the global community.

â€œFrankly, there is no dignity in a slow and painful death. We might as well bomb our islands instead of making us suffer, to witness our slow and fateful disappearance. “

COP26 President Alok Sharma announced new funding of $ 197 million for adaptation in Africa from the UK government. Of this amount, $ 27 million will support the Upstream Facility of the Accelerated Adaptation Program in Africa, to provide technical assistance and a pipeline of bankable projects.

The package is expected to unlock nearly $ 1.2 billion for climate adaptation in Africa. Sharma said there would be more to come.

U.S. Secretary of State Antony Blinken also announced new funding for climate adaptation from the U.S. government. He said the US president will work with the US Congress to commit $ 3 billion a year to funding adaptation by 2024.

This is the largest commitment ever made by the United States to reduce the impact of climate change in the countries most at risk from it around the world.

There is also no agreement on how to define the term â€œclimate variabilityâ€. The climate has undergone constant change throughout Earth’s 4.5 billion year history, but most of these changes occur on astronomical or geological timescales and are too slow to be observed at all. human scale.

In addition, it has been argued that climate change leads to acute conflicts and therefore becomes imperative to achieve a good understanding of the phenomenon in Africa.

Much public, political and academic attention is now devoted to the issue of global warming and climate change. There is a broad scientific and political consensus that climate change poses a significant threat to Africa, its ecosystem and many of its species.

The empirical data of science has become more irrevocable than ever that climate change is occurring. The proof is all around us. And if we don’t act, we will see catastrophic consequences, including rising sea levels, droughts and famine, and the loss of a third of the world’s plant and animal species, Africa making expenses.

A large number of reports and public statements have also suggested that climate change in Africa is a security threat.

African governments should make informed and transformational choices about climate change. It requires the best and most up-to-date science.

There is climate information that could improve decision making in these sectors, thereby mitigating the effects of adverse weather. But at present, this information is rarely integrated into policy formulation processes and development decisions in some African capitals.

IRI concluded that a major continent-wide effort to mainstream climate risk management into climate-sensitive development processes at all levels is an urgent and priority requirement for Africa today.

In conclusion, the expression of solidarity and a united voice of African leaders at COP26 is a breath of fresh air. When all is said, what do we do?
It is therefore time for Africa to invest in indigenous scientific research and appropriate African solutions to our climate challenges. It is time for Africa to take effective control of its climate destiny.

The author is an international relations and security analyst