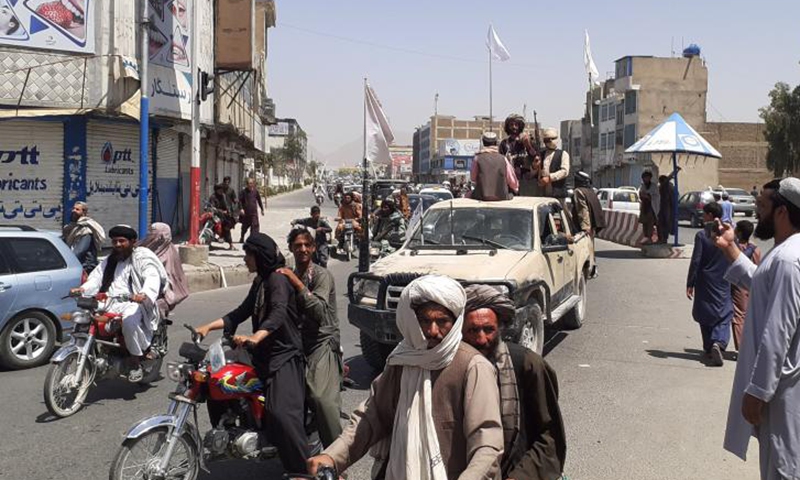 The Afghan Taliban military offensive has proceeded faster than observers around the world expected, and it seems to be only a matter of time before the capture of Kabul, as the latest media reports Foreigners have shown that Taliban fighters have entered the capital and are negotiating with Afghan government officials on a peaceful transition of power.

Although some Western voices expect China to play a bigger role in Afghanistan after the sudden US withdrawal, they even speculate that China may send troops to fill the vacuum left by the United States, Chinese experts have said that such speculation is completely unfounded, and the most things China can do is evacuate Chinese nationals in the event of a massive humanitarian crisis, or contribute to the reconstruction and development of post-war, advancing projects under China’s proposed Belt and Road Initiative (BRI) when security and stability are restored in the war-torn country.

The United States cannot just go away and take no responsibility for the region, and if Afghanistan faces serious humanitarian problems, such as a refugee crisis, Washington should cooperate with other countries in the region and at least provide economic assistance, because it was the United States that created this mess, experts noted.

If the Taliban build a new country after taking full control, they should keep their promise to cut all ties with terrorists, extremists and separatists – the “three evils” – in the region, and ensure that l Afghanistan is not becoming fertile ground. for these forces. Only then can he gain more recognition in the world than before the U.S. invasion after 9/11, Chinese analysts said. They noted that if Afghanistan becomes fertile ground for the “three evils,” the UN Security Council may consider sending a UN peacekeeping force to the country.

According to AP, Taliban fighters entered Kabul on Sunday and demanded the unconditional surrender of the central government, officials said, as Afghans and foreigners rushed for the exit, marking the end of a 20-year Western experiment. aiming to remake Afghanistan.

Afghan President Ashraf Ghani and First Vice President Amrullah Saleh left the country and headed for Tajikistan, from where they are traveling to a third country, media reported.

The besieged Afghan central government, meanwhile, is hoping for an interim administration, but has increasingly few cards to play… Helicopters buzzed overhead, some apparently evacuating personnel from the US embassy. Several other Western missions were also preparing to withdraw personnel, AP reported.

Many netizens around the world have compared the current situation to the American evacuation of Saigon (now Ho Chi Minh City), Vietnam in 1975, to poke fun at the American failure and unnecessary military actions around the world in development, as well as people who still have wishful thinking. when it comes to the US government.

Some Chinese netizens have said on China’s Twitter-like social media platform Sina Weibo that “these people who believe deeply in the United States never learn the lesson, they are just abandoned by the Americans as garbage” and ” the 20 years war ends like a joke. The American soldiers died for nothing, the Taliban came back, and the only change is that more people have died and American taxpayers have wasted their money feeding the American military-industrial tycoons.

Earlier the same day, according to Al Jazeera, the Taliban had taken control of Jalalabad in Afghanistan without a fight, according to officials and a resident, effectively leaving the capital Kabul as the last major urban area under government control.

Zhu Yongbiao, director of the Center for Afghanistan Studies at Lanzhou University, told the Global Times on Sunday that “the Taliban’s progress is faster than expected. in fact, the performance of the Taliban has not been bad so far. “

“We haven’t seen any massacres or violence against women, and most of the big cities have been captured without a fight. There are accusations against the Taliban, but we have yet to see hard evidence. The evacuation of the American embassy was also not interrupted. or attacked even if Taliban troops have already entered Kabul. All of this shows that the war will not end violently, ”Zhu said.

Wang stressed, “We hope that the Afghan Taliban will make a clean break with all terrorist organizations, including the ETIM (Eastern Turkestan Islamic Movement) and fight them resolutely and effectively to remove obstacles, play a positive role and create conditions conducive to security, stability, development and cooperation in the region.

Baradar told Wang in Tianjin that “the Afghan Taliban will never allow any force to use Afghan territory to commit acts harmful to China. The Afghan Taliban believe that Afghanistan should develop friendly relations with neighboring countries and the international community”.

Zhu said the world must be ready to face a new Taliban-controlled Afghanistan, and the key is whether the Taliban will keep their promise to ensure that no force can use their country’s soil. to threaten other countries in the region, and be more inclusive rather than extreme, and then more countries will recognize the country. 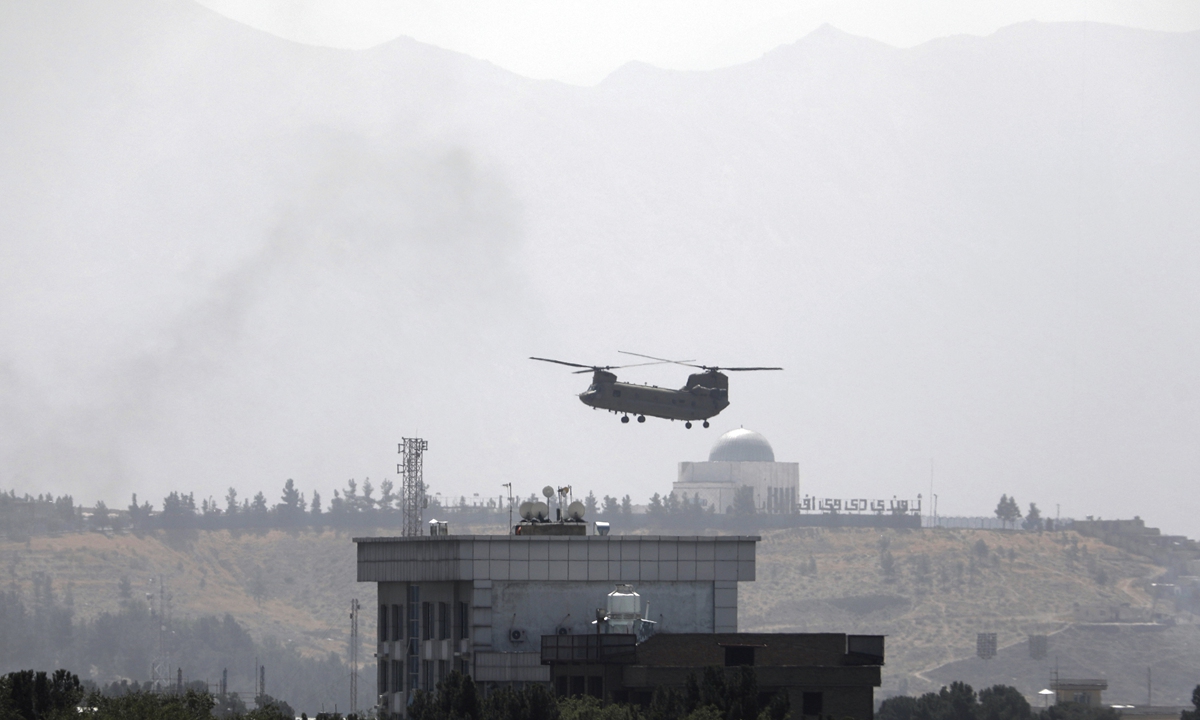 A US Chinook helicopter flies over the US Embassy in Kabul, Afghanistan on Sunday. Helicopters land at the US Embassy there as diplomatic vehicles leave the compound as the Taliban advance on the Afghan capital. Photo: VCG

What can China do?

In Tianjin last month, Wang also said that “the precipitous withdrawal of US troops and NATO from Afghanistan in fact marks the failure of US policy on Afghanistan. The Afghan people now have an important opportunity to achieve national stability and development “.

But some voices in the West still want to apologize for the humiliation of the United States. Reuters released an analysis on Sunday titled: As Taliban Advance, China Prepares Ground to Accept Embarrassing Reality.

The article says the Taliban’s momentum as US forces pull out is embarrassing for China, which has accused religious extremism of a destabilizing force in its western region of Xinjiang and has long feared Taliban-controlled territory be used to shelter separatist forces.

In fact, it was the United States that should have felt embarrassed and uncomfortable, Chinese analysts said, and the reason some Western media or analysts have made such comments is that they want the China repeats the mistake made by the United States – “walking the graveyard land of empires.”

Zhu said the West is trying to set traps for China. “The current situation is a mess for the United States and will impact countries in the region, then the impact will come to us [China]. If the Taliban take control of the country immediately and bring stability, that wouldn’t be bad news. Extremism and terrorism would be brought under control in a stable country that achieves peaceful transfer without chaos. “

Pan Guang, a senior expert on counterterrorism and Afghan studies at the Shanghai Academy of Social Sciences, told the Global Times on Sunday that “in order to prevent the situation from spilling out, China has already started cooperation against terrorism with other countries. in the region, including Tajikistan and Pakistan, to strengthen border control. “

What China could do is participate in post-war reconstruction and provide investments to help the country’s future development, Pan said.

“The United States cannot just run away. It should also take responsibility for rebuilding the country and providing assistance. Washington should support international cooperation on drug and refugee issues,” said Pan. “If Afghanistan faces a huge crisis in the future, the UN Security Council will have to come together and pass a resolution to send a peacekeeping force, and that would require the United States to be also united and responsible. ”