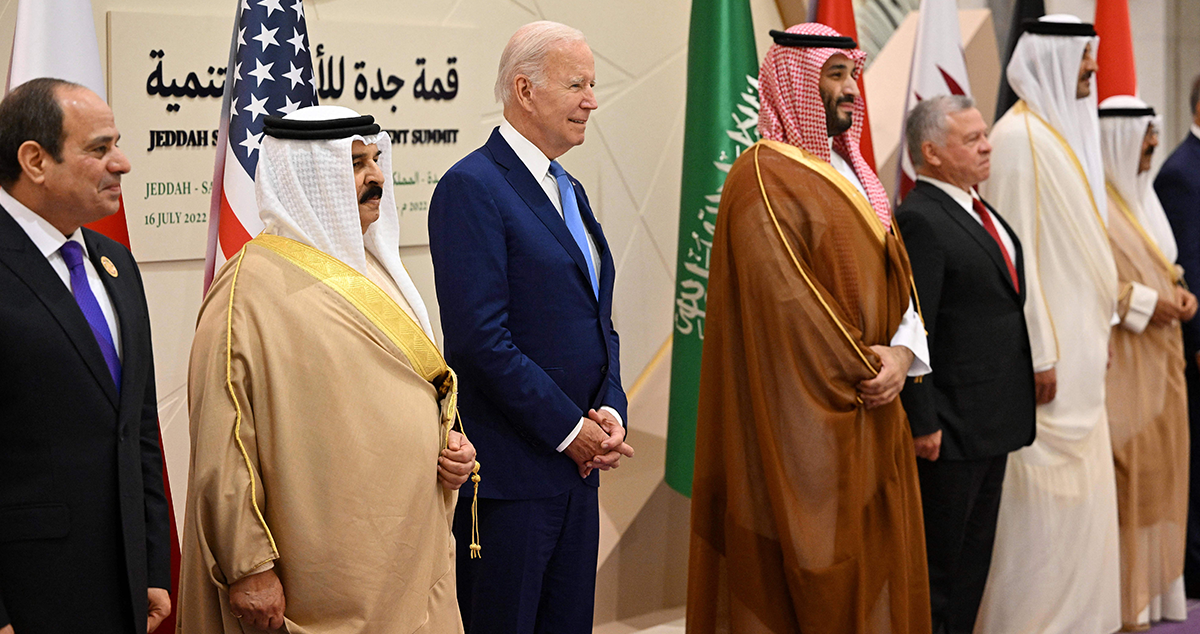 At the Jeddah summit in mid-July, President Joe Biden declared that “America is back,” a message hailed by Saudi and Gulf media. But Washington cannot maintain its influence and develop strong relations in the Middle East without sustained American interest and effort, which has swayed with each change of administration.

The further the United States moves away from the Middle East, the more influence it loses and the greater the opening it creates for Russia and China to fill the void. Although the White House hasn’t seemed to care for several years, the war in Ukraine has brought about a sea change in dynamics and perceptions. The war led to a global economic crisis that affected the United States, worsening an already difficult economic situation exacerbated by the COVID-19 pandemic. This crisis highlights the interconnected nature of the global economy and the importance of limiting trade with some countries while maximizing partnerships with others. In line with this policy, Saudi Arabia seems to have fallen into the friend-shoring zone, both economically and politically.

Understandably, given Washington’s frayed relationship with Riyadh due to the widely criticized war in Yemen and the murder of Saudi journalist and US resident Jamal Khashoggi, there was a great deal of skepticism about Saudi Arabia’s willingness to to help. It comes at a time when Saudi relations with Russia have grown diplomatically and militarily, including the signing of a “military cooperation agreement” last year amid US public pressure to cut sales of arms to the kingdom. Moreover, Saudi Arabia’s Energy Minister Prince Abdulaziz bin Salman last month called relations between Riyadh and Moscow “hot like the weather in Riyadh” during a surprise visit to the International Economic Forum in St. -Petersburg, which sparked speculation about whether the kingdom was ready to cooperate with the United States

So the question is, can the Gulf countries help serve US interests after years of US indifference? So far, the answer seems to be yes. US special envoy and coordinator for international energy affairs Amos Hochstein said that, based on discussions held in Jeddah during Biden’s visit, major oil producers are likely to increase production in the coming weeks. Crown Prince Mohammed bin Salman said on July 16 that Riyadh would increase its production capacity to 13 million barrels per day (bpd) by 2027, well above the kingdom’s average production in 2021 of 10.7 million. of bpd. It is unclear if Riyadh can actually increase production to this level so quickly, as industry experts claim, or if it plans to continue exploration, as the kingdom’s current sustainable production capacity is 12. .2 million bpd according to International Energy Agency estimates. Moreover, beyond technical considerations, there are also other challenges to boosting production, a point highlighted by the Iran-backed Houthi militia’s March attack on Saudi Arabia’s Yanbu oil refinery. The general message, however, is clear: the Saudis and the Gulf are ready to increase their oil production capacity in cooperation with the United States.

This does not necessarily mean that Saudi Arabia will jeopardize its budding relationship with Russia. Indeed, it appears the Saudis are keen to maintain an open-door policy with the Russians as the Biden administration continues its push to revive the nuclear deal with Iran. In his July 9 editorial in The Washington Post, President Biden has stressed that he will meet with Europe and other allies to reverse American “isolation” on Iran, despite Tehran’s hostile attitude and lack of cooperation with the International Agency of atomic energy on its past nuclear activities. Riyadh has realized that its national security is not a priority for the United States

President Biden has tried to reassure countries at the Jeddah summit of his intention to re-engage with the Middle East through “principled American leadership” so as not to leave a “vacuum” filled by Russia, China and Iran. In his framework of “five key principles” presented at the summit, Biden expressed support for like-minded countries that support a “rules-based” international order. He also assured the Gulf that the United States would support its security by not allowing foreign or regional powers to jeopardize its waterways and by deterring threats. In addition, he pledged that the United States would work to reduce tensions, defuse and end conflicts wherever possible.

On this point, the Biden administration has already tried to positively influence the trajectory of the war in Yemen by promoting diplomacy as the main tool for resolving the conflict. However, despite sustained diplomatic cooperation over the past 18 months that has led to major shifts in the Yemeni political scene, the administration’s efforts have neither brought peace nor made Yemen and the region more secure. Ending the war is not easily achievable as the United States lacks direct influence with all parties involved, especially the Houthi militia.

Given America’s inability to influence the Houthis, as well as the Biden administration’s overambitious goal of “ending the war in Yemen,” the best the administration can do is pressure on the Saudis to end their involvement or drastically reduce their military operations. A departure without a peace agreement would jeopardize the territorial integrity of Yemen and leave the country completely vulnerable to attacks by the Houthis. The administration has finally understood the complexity of the situation and has been more open about the difficulties of getting the Houthis to cooperate, but it must take a decisive stand on Iran and its malign activities, which are destabilizing the region.

President Biden’s comments on the importance of pursuing the Iran deal have created a sense of unease in the region, as the United States appears to be pursuing its own interests and those of European countries, regardless of the security concerns of their Arab partners regarding Iran’s role and activities in the Middle East. Divergent views on this issue must be reconciled, in partnership with Israel and the countries that participated in the Jeddah summit, to restore relations with Iran, and negotiations must extend beyond Iran’s nuclear program Tehran to also cover its ballistic missile program and support for militias throughout the region.

Overall, the Saudis seem willing to support the United States, but they are also trying to be less dependent on Washington, given the different political approaches to regional security. The Saudis understand that there are changes in the US administration and they come every four or eight years, which means the US system cannot provide an indefinite guarantee. Going forward, it is important to build trust and ensure buy-in from Democrats and Republicans alike to the need for principled American leadership in the Middle East to ensure that the partnerships that are currently being cultivated are not compromise in the future. The E. – engaging because it understands the value of these partnerships over the long term and the benefits they can bring to the stability of the region.

Fatima Abo Alasrar is a non-resident researcher at the Middle East Institute and senior analyst at the Washington Center for Yemeni Studies. The opinions expressed in this article are his own.

The Middle East Institute (MEI) is an independent, non-partisan, non-profit educational organization. It does not engage in advocacy and the opinions of its scholars are their own. MEI welcomes financial donations, but retains exclusive editorial control of its work and its publications reflect only the opinions of the authors. For a list of EMI donors, please click hise.