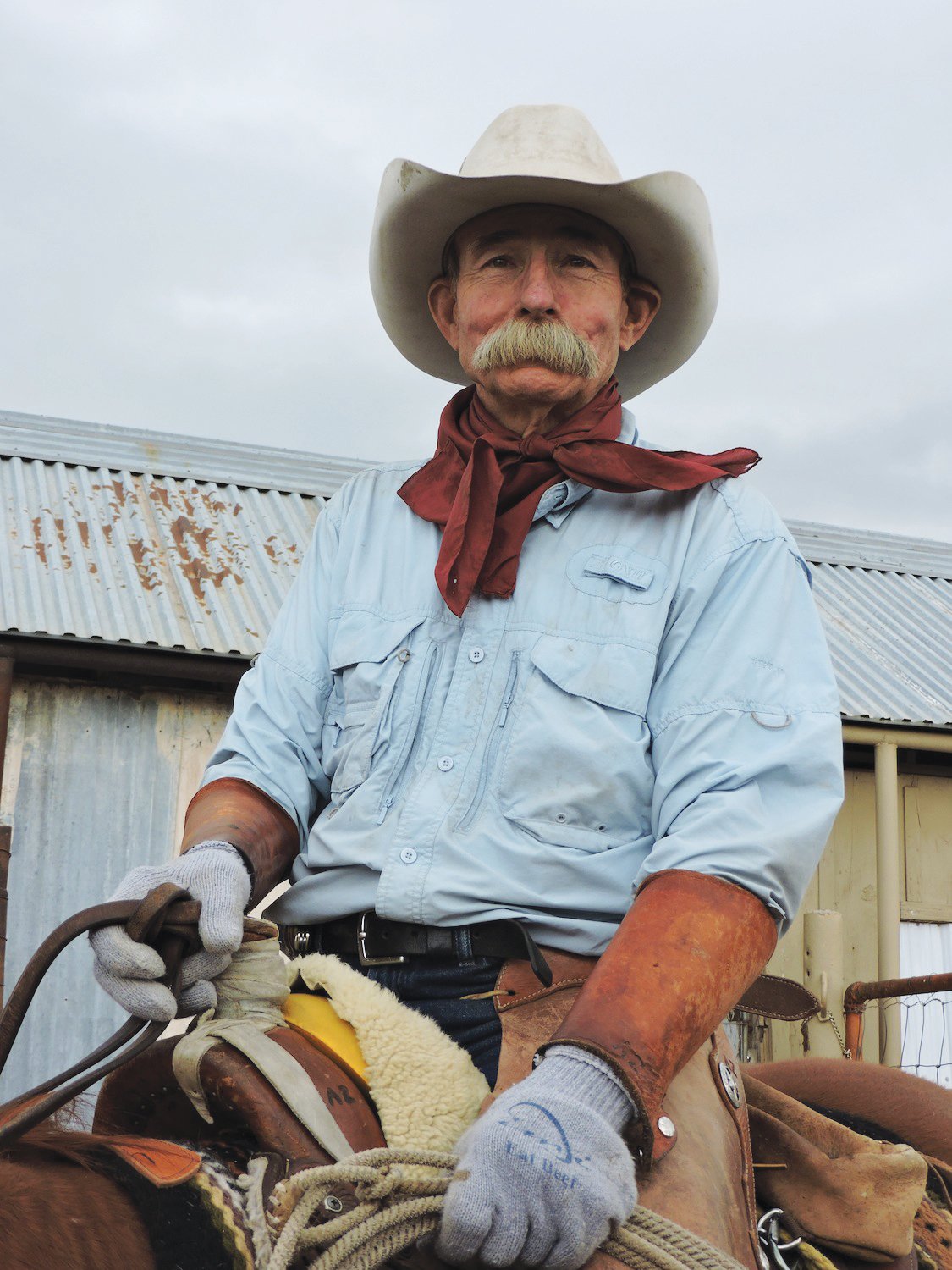 June 10 (2022) Baxter Ashby Black, large animal vet, cowboy poet and philosopher, husband, father and dad rode home on his old horse. Just before sunrise that day, Jesus hired another old cowboy to ride the Golden Fields across the Jordan.
The iconic cowboy poet and storyteller had humble beginnings. He was born to Robert and Teddie Black at the Brooklyn Naval Hospital just before the end of World War II. He was the first of what would become four brothers: Baxter, Bob, John and Stephen. The family traveled through West Virginia, Texas, and ended up in Las Cruces, New Mexico, where Baxter lived. When Baxter was 15, his life changed dramatically when his father, Robert, who was the youngest dean of agriculture at New Mexico State University, died suddenly and he became the man of the House. While doing his bit for the family, he continued to play guitar among other things but he still went to church on Sundays.
He made his first attempt at writing in high school where, as he would recall, “I wrote something religious, I think…” His teacher’s encouragement, after scoring a Texas-sized F in red on the paper were, “Baxter, write about what you know.
When Baxter started college, he began to wonder what he would major in. His first love was farming, there was also a war going on and he didn’t want to be conscripted. He’s been there more than once and passed his Navy medical. He “wanted to fly one of those big planes,” he told those recruiters.
His decision to enroll in vet school came when he realized that no matter what, he could always “fix his cow.” He applied to Colorado State University. He was accepted on the condition that he completed some mathematics courses. At the end of his third year, the only thing standing between him and vet school was a 58% in “triggernometry” (60% was passing). He went to “beg” his teacher to give him that D. The graduate teacher eventually conceded so much that he swore to “never take up calculus or trigonometry again.” He kept that promise for the rest of his life!
The vet school saw his jovial and enterprising spirit and vigor take flight again. Baxter made and sold leather belts, brewed coffee in the morning, cut hair and did laundry, all for those willing to pay pennies. He even counted ants one summer for a graduate student’s research project. He also made a few bucks playing in a band with a few of his classmates on the weekends.
Baxter graduated from veterinary school in 1969 and eventually found himself in Idaho as a company veterinarian for the JR Simplot Company. It was while he was driving around and talking to old cowboys that his storytelling began to take hold. There was no television and very few radios in those days, so he would pick up his guitar and tell stories. He found he could take cowboy stories, write a poem about it, tell it to them, and they loved it. In 1980, he found himself in Denver, Colorado, where he worked as a help desk vet for a pharmaceutical company. Baxter’s reputation as an artist spread. Soon, the constant demands for his brand of poignant, insightful, and hilarious programming allowed him to grow from part-time cowboy poet to full-time cowboy artist.
Shortly after forming the Coyote Cowboy Company, he married his wife of 39 years, Cindy Lou and became Jennifer’s father. A decade later, her son Guy was born and after Jennifer graduated from high school, they moved to Benson, Arizona.
During his forty-year career, Baxter wrote about what he knew, cowboys, cowgirls, rodeo, cattle, horses, and ranch life. He wrote with a flair that still captures the imagination of anyone who reads his stories today. He has spoken all over the United States, Canada and Australia. His column has been printed in over 130 newspapers and his radio show has aired on 150 stations over the years. He has sold over 2 million copies of his books, CDs and DVDs. He has been on the Johnny Carson show several times and was a regular commentator on NPR’s morning edition for 20 years.
He lived his life guided by simple faith in Jesus and his warning: “Love God, show forgiveness and mercy to all who offend, and take care of the least of them. No one was a stranger to Baxter, whether you sat next to him on the plane for thirty minutes or knew him for decades. Every person he met was a friend.
Something Baxter would always say after returning from one of his frequent trips seems deeply appropriate for his journey through this lifetime. Should Jesus look at him and say, “How did it go?” it’s easy to imagine Baxter, with a beaming smile under his mustache, saying, “God, I made them laugh, and that’s all that matters.
Baxter is survived by his wife, Cindy Lou Black; his daughter Jennifer Cubbage, her husband Will and their children William and Savannah; his son Guy Black, his wife Jessica and their children Gwendolyn and Magnolia; his two brothers, Bob and Steve and his two dogs, Solomon and Rudy.
In lieu of flowers, memorial donations may be made to JF Shea Therapeutic Riding Center, 26284 Oso Road, San Juan Capistrano, CA 92675; Canine Companions, 2965 Dutton Ave, Santa Rosa, CA 95407 or to a favorite charity of your choice.