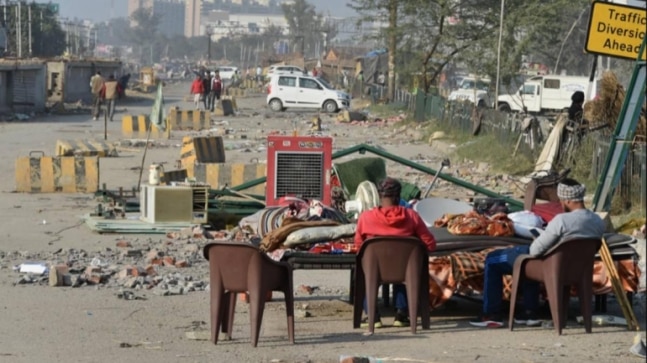 After more than a year, the Singhu border, which was the epicenter of peasant unrest, now looks deserted with the last batch of protesters who left for their home country on Monday.

Farmers began to leave the site at the Delhi-Haryana border on Saturday after the Samyukta Kisan Morcha (SKM) suspended the protest following the repeal of three agricultural laws and the Center conceded its other demands, including a panel of legal guarantees on the MSP for crops and withdrawal of police files registered against them.

The border which until recently housed thousands of agitators living in tents and having their meals in langars, now has earthmovers and cranes working all day to remove concrete barricades and boulders, which were installed by the police to prevent farmers from entering the capital.

Farmer leaders said the protest site at the Ghazipur border will be cleared by Wednesday morning, as small groups of protesters are still there.

Besides Singhu, farmers, mainly from Punjab, Haryana and Uttar Pradesh, also besieged the Tikri and Ghazipur borders in Delhi on November 26 to protest against the three laws and demand their repeal.

â€œThe protesting farmers have now cleared the Singhu border site after more than a year of struggle. The last group of protesting farmers left for their homes today (Monday), â€said an official from SKM, a coordinating body of 40 agricultural unions spearheading the agitation.

He added that some NGOs, farmers’ groups and police were carrying out work to clear the stretch of road where the protest took place. On November 29, the laws were repealed by Parliament, and days later the Center accepted outstanding demands from farmers, including those relating to MSP and police affairs.

“Barricades, concrete boulders and other obstacles are removed from the highway (in Singhu), which hosted thousands of demonstrators for over a year, with the help of diggers, cranes and volunteers “, said the head of SKM.

The Tikri border section on Rohtak Road was opened to vehicular traffic on Sunday evening. Delhi police officials said work to dismantle concrete barriers and other obstacles, which were put in place to prevent protesting farmers from moving forward, will be completed by Tuesday.

They said this work started on Saturday evening. Some farmers are still in Ghazipur due to the presence of barriers, another Delhi police official said. “Temporary barricades at the Ghazipur border are still placed. Police are waiting for farmers to leave the site,” the official said.

However, farmer leaders said only a small group of protesters remained at the Ghazipur protest site. “They are awaiting the arrival of the peasant leader Rakesh Tikait. Tikait will probably reach the Ghazipur border site on Tuesday evening. The demonstrators will then leave to return home on Wednesday morning,” said a peasant leader.