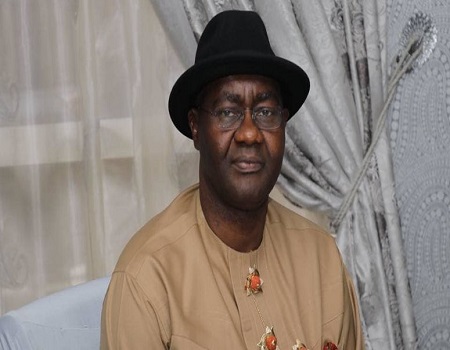 Senator Magnus Abe, a former representative for the Rivers South-East Senate District in the National Assembly, has denied being the author of a resignation letter allegedly written by him to the National Chairman of the All Progressive Congress, informing the party of his resignation.

The lawmaker who saw himself lucky in a battle for party control in Rivers State with his former political ally and former transport minister, Chibuike Amaechi, announced via his verified Facebook account on Wednesday that he was not not the author of the letter which has gone viral on different social media platforms.

Senator Abe, however, acknowledged widespread speculation that he was about to quit the APC, saying he had to quit the party because he lacked the ability to win elections in Rivers State. .

“I didn’t write the so-called circulating resignation letter, but everyone knows I had long since left the All Progressives Congress (APC) in Rivers State. The party does not have what it takes to win elections in the state,” he said on the Facebook post.

Abe’s departure from the APC was only a matter of course and time, as he repeatedly said he was going to be on the ballot for the state governor election. Rivers in 2023, even though he had boycotted Rivers’ APC governor’s primaries.

Moreover, several other of his supporters within the party had recently resigned from the party, underscoring the fact that he would also follow suit, as it was rumored that he was preparing to join the Social Democratic Party SDP and stand as a candidate for governor of the party.

Meanwhile, the Rivers State branch of the APC has reacted to the wave of resignations by some prominent party members, saying the movement of politicians inside and outside political parties in Nigeria is now part of of the political culture of politicians, especially towards the end. each election cycle and noting that it was not unique to the APC but cut across all political parties.

At a press conference on Wednesday, Chris Finebone, APC publicity secretary, split into two categories of party members who had left, one being those who resigned to pursue other interests in life or exercised their right to free association by seeking greener political pastures elsewhere.

The second group according to him are “a few people loyal to Senator Magnus Abe who also recently resigned”.

Finebone said the party recognizes the contributions of some of those in the first category and wishes them well in their future endeavours.

Of the second, he said, “These are individuals who for the past two years have spoken and acted in every way to destroy the APC in Rivers State. Led by Abe, these people tried everything to split our party in the state. They have endlessly colluded with the Governor of Rivers State and used certain elements of the state justice system to frustrate and destroy our party through unnecessary litigation. The culmination of their evil machinations was the exclusion of Rivers APC from the ballot in 2019. There is evidence of how Senator Abe and his lieutenants celebrated the day the party was barred by the court from participating in this election because of their dispute.

“After the unfortunate development of 2019, Abe continued to receive out-of-state support and persisted in undermining Rivers APC in every way imaginable, primarily through frivolous litigation executed through his proxies. At one point they attacked and completely destroyed the Rivers APC Secretariat at Forces Avenue, Old GRA, Port Harcourt. Recently, they also hired thugs and tried to destroy the current Party Secretariat.

Tired of Abe’s antics, the majority of his supporters openly joined the ruling People’s Democratic Party (PDP) while others found their way back to the party mainstream. However, it has recently come to our attention that Senator Abe and the few people still with him have concluded plans to join the Social Democratic Party (SDP) on whose platform Abe will run for Governor, d ‘where their persistent hype that Abe will be on the ballot come 2023.

“In what appears to be a carefully planned exit plan, close associates of Abe have begun resigning from the APC and badmouthing their exit on social media as part of their exit plan as s ‘they were functional party members, just deceiving the public.

“This press conference is essential to explain to you and the public that Rivers APC considers the official release of Abe and his associates from APC to be good riddance. We liken it to a successful excision of a debilitating cancer from the body. Rivers APC can now breathe a sigh of relief at Senator Abe’s sustained destabilizing attack.

“We are bold in asserting without an iota of doubt that Senator Abe and his supporters had, by their actions and statements, long since ceased to be functional members of the APC. They avoided and refused to participate in the membership revalidation exercise that was conducted nationwide by the party. They have also refrained from other legitimate party activities, making their recent so-called resignation a mere formality and part of their face-saving exit strategy aimed at deceiving the public.

“We appreciate your understanding that there is no outing or general exodus of well-meaning Rivers APC members. We think you and the public would appreciate our party being, by far, better off without Abe and his ragtag supporters.